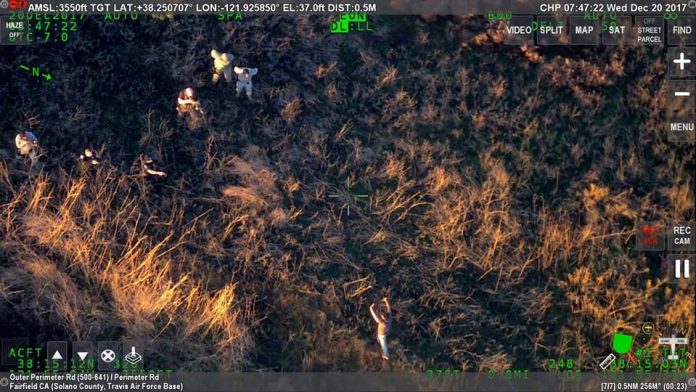 All base gates were temporarily closed until the individuals were apprehended by Travis AFB Security Forces. Gates re-opened at 7:37 a.m. and operations have returned to normal. There were no injuries to base personnel or damage to base property.

The individuals were fleeing the Santa Clara County Police Department after an attempted traffic stop on the vehicle.

“I am extremely fortunate as Travis Air Force Base’s defense force commander to have the ability to rely on not only proud defenders within the 60th Security Forces Squadron, but also a superb regional law enforcement network to keep our installation safe and secure,” Lt. Col. Joseph Quinn, 60th Security Forces Squadron commander said. “That is exactly what happened this morning and history proves it always will be. This morning’s high-risk response involved the following agencies coming together to rid the criminal elements that breached our defenses: Santa Clara County Police Department, California Highway Patrol, Fairfield, CA Police Department, Suisun City Police Department, Air Force Office of Special Investigations, 60th Civil Engineer Squadron Fire and Emergency Services flight and the David Grant USAF Medical Center Emergency Medical Services. A special shout out to Travis AFB’s air traffic control personnel and the California Highway Patrol’s helicopter support who honed in our search efforts. I prayed for and I’m grateful the response and detainment that occurred without incident due to the professional response by all involved.”