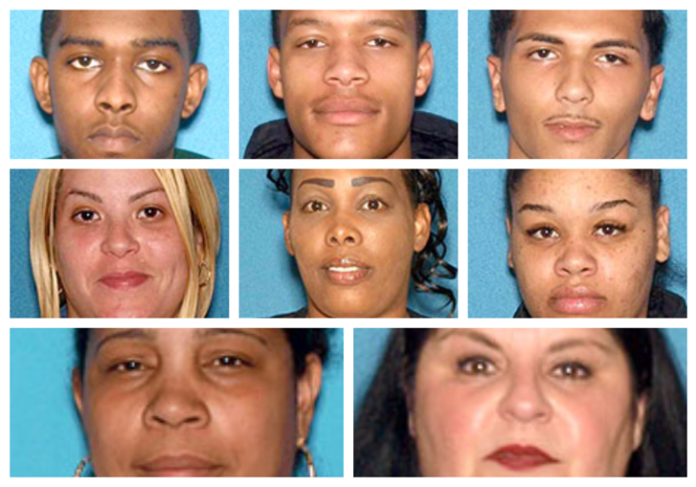 TRENTON – Attorney General Gurbir S. Grewal announced criminal charges in two related incidents that occurred on the evening of Saturday, April 25: a home invasion robbery in Pittsgrove, N.J., followed several hours later by the shooting of a New Jersey State Trooper who was conducting an investigation at the scene.

The Salem County Prosecutor’s Office charged five women for the home invasion robbery, and the Attorney General’s Office of Public Integrity & Accountability (OPIA) charged three men in connection with the shooting. One of the men, Najzeir “Naz” Hutchings, 21, of Bridgeton, N.J., has been charged with attempted murder of a law enforcement officer. All eight defendants have been arrested and are being held in the Salem County Jail pending detention hearings. The investigation of the trooper shooting is ongoing and additional charges may be filed.

“We have zero tolerance for those who violently attack our law enforcement officers,” said Attorney General Grewal. “Our State Troopers put their lives on the line every day to keep our communities safe, and Saturday’s incident is an important reminder of the brave work our Troopers perform. I am grateful to the investigators and prosecutors who have worked around the clock since Saturday night to identify the perpetrators and ensure that they are held accountable.”

“Anyone attempting to murder a New Jersey State Trooper, or any member of law enforcement, will find no safe haven. Our pursuit will be relentless, unwavering and swift,” said Colonel Callahan. “Fortunately, we did not suffer a tragedy. I commend our troopers and partnering agencies who ensured that those responsible were quickly arrested and no longer pose a threat to our communities.”

Later that evening, a State Trooper, Detective Richard Hershey, was investigating the incident at the mobile home park when a caravan of vehicles approached the scene. Several individuals exited the vehicle and confronted Detective Hershey, who identified himself as a law enforcement officer. At least three of the individuals in the caravan – Hutchings, as well as Kareen “Kai” Warner Jr., 19, of Bridgeton, N.J and Colby Opperman, 18, of Bridgeton, N.J. – were armed with firearms.

At approximately 10:40 p.m., Hutchings allegedly opened fire on Detective Hershey. The officer was wounded in his upper leg. Detective Hershey returned fire and the suspects fled the scene. Detective Hershey was transported to Cooper University Hospital in Camden and underwent surgery. He is recovering in the hospital and is in stable condition.

One of the members of the caravan, who is not charged in this case, was also injured during the gunfire. She suffered a wound to her leg, was treated at the hospital, and later released.

“Anyone who would open fire on a law enforcement officer conducting an investigation, as Hutchings is alleged to have done, represents a grave danger to the community,” said Director Thomas Eicher of the Office of Public Integrity and Accountability. “Justice demanded swift action in this case, as did public safety. We will continue to work closely with the New Jersey State Police to ensure that those responsible for this attack are prosecuted to the full extent of the law.”

“The strength of our law enforcement community in New Jersey lies in our partnerships and collaboration, and there is no stronger partner than the New Jersey State Police,” said Salem County Prosecutor John T. Lenahan. “This shocking attack on a member of the State Police who was working with us on an investigation demonstrates what our officers risk every day to protect us. We are grateful that he is recovering and we are gratified that, working together, we were able to bring those responsible for that shooting – and the home invasion that preceded it – to justice.”