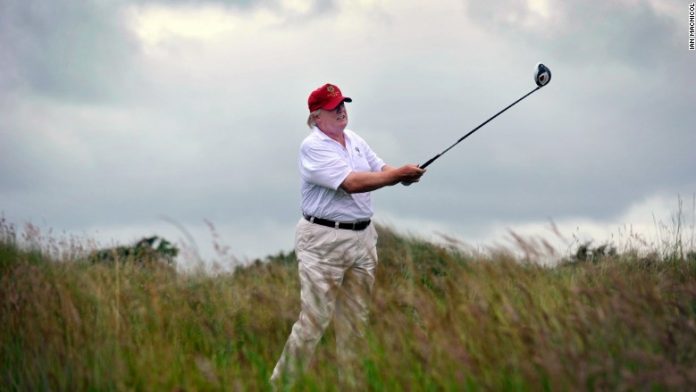 President Donald Trump’s Mar-a-Lago club in south Florida has doubled its new-member fees to $200,000 due to growing interest since the election, a major spike that is already drawing criticism that the president is profiting off his rise to the White House.

The increase, first reported by CNBC and confirmed by club managing director Bernd Lembcke in a Bloomberg interview, could boost the revenues of the Palm Beach club Trump has called the “Winter White House.” It could also directly benefit his private fortune, because he has refused to divest his business holdings while in the Oval Office.

The increase restores the Mar-a-Lago price to its pre-recession level, before economic troubles made it harder for the club to attract new members.

Mar-a-Lago, which Trump purchased in 1985, encompassing more than 17 acres and operates in two money-making ways – as a private club open to dues-paying members, and as a venue that can be rented for weddings and events.

Trump has reported making millions of dollars from Mar-a-Lago in the past, with revenues rising during his presidential campaign, according to his federal financial disclosures. The club received more than $29.7 million in “resort-related revenue” between July 2015 and May 2016, according to his most recent disclosure, while an earlier filing by Trump reported the club taking in $15.5 million in resort revenue between January 2014 and July 2015.

Trump Organization executives did not respond to requests for comment on Wednesday.

Since his election victory, Mar-a-Lago has assumed a prized role in Trump’s presidency, rivaling Trump Tower as a focal point of his lifestyle and ambitions.

The club’s deep-pocketed clientele are offered the unique opportunity to encounter the president when he’s relaxing at his vacation home.

Trump, his family, major donors and other supporters gathered at the club for a glitzy celebration on New Year’s Eve. Club membership, its website says, offers “the highest privileges and an elite lifestyle reserved for a select few.”

The club is “certainly a lot more crowded now that he’s president,” Jeff Greene, a Florida billionaire and Mar-a-Lago member told The Washington Post on Wednesday. At a recent dinner, Greene said the crowds were massive, adding, “It never used to be that packed.”

As part of Trump’s pledge to separate his business from his presidency, his son Donald Jr., has been named the official director of the club, according to a Florida business filing on Monday.

When the club faced $120,000 in unpaid Palm Beach fines resulting from a dispute over the height of a flagpole, Trump helped pay for it with a $100,000 donation from his personal foundation.

The new price jump was slammed by ethics watchdogs, who have criticized Trump’s lack of separation between his private finances and public power. Norm Eisen, a former chief White House ethics adviser to former President Barack Obama’s administration who is part of a lawsuit accusing Trump of violating a constitutional provision barring presidents from taking payments from foreign governments, called the Mar-a-Lago move “naked profiteering that is more like something out of the era of Louis XVI.”

Mar-a-Lago’s price jump was revealed the same week that another corner of the Trump business empire voiced its growing ambitions. Speaking of a planned expansion, Trump Hotels chief executive Eric Danziger told a Los Angeles investment summit on Tuesday, “There are 26 major metropolitan areas in the U.S., and we’re in five. … I don’t see any reason that we couldn’t be in all of them eventually.” His comments were reported by Bloomberg.

Greene, a Hillary Clinton supporter and Democratic candidate in Florida’s 2010 Senate primary, said the price jump could be a natural reflection of the club’s soaring demand.

“The reality is most country clubs can’t” raise prices so quickly, Greene said. “But Donald Trump is the board of directors, so if he decides, ‘I’ll let people pay more dues,’ he can do it,” Greene said.

Greene acknowledged that the “optics” of the club raising its rates during Trump’s presidency looked disconcerting. But “I don’t think Donald is a guy who cares very much about optics,” Greene added. “He does what makes sense to him, and he doesn’t care what anyone else thinks.”