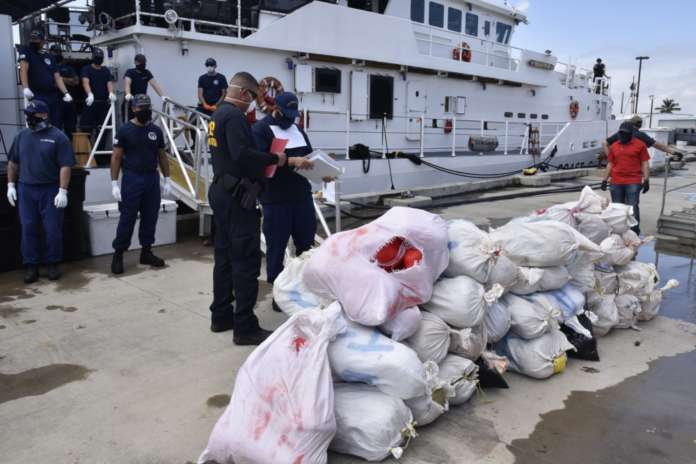 The seized drug shipment is estimated to have a wholesale value of more than $1.3 million.

“Through this time of uncertainty, Coast Guard cutter crews remain vigilant and on watch to safe guard the American people from all maritime threats,” said Lt. Johnston Ariail, the commanding officer of the William Trump. “This includes preventing drug smugglers from attempting to infiltrate our borders by capitalizing on the current pandemic.”

The seizure occurred during a patrol, when William Trump crew sighted a suspect go-fast vessel with two people aboard. As the cutter’s small boat crew approached the suspect vessel, they observed multiple bales of suspected contraband being jettisoned from the go-fast.

The crew of the William Trump recovered 37 bales and 12 individual packages, which tested positive for marijuana. The cutter’s crew offloaded the contraband in coordination with Customs and Border Protection (CBP) officers, Immigration and Customs Enforcement (ICE)-HSI, DEA and CCSF special agents in San Juan, Puerto Rico.

Like all the vessels in her class William Trump is named after an individual from the Coast Guard’s past who has been recognized as a hero. Her namesake, William Trump, distinguished himself for his heroism helping soldiers land on Omaha Beach, during the Invasion of Normandy, actions that won him a Silver Star.