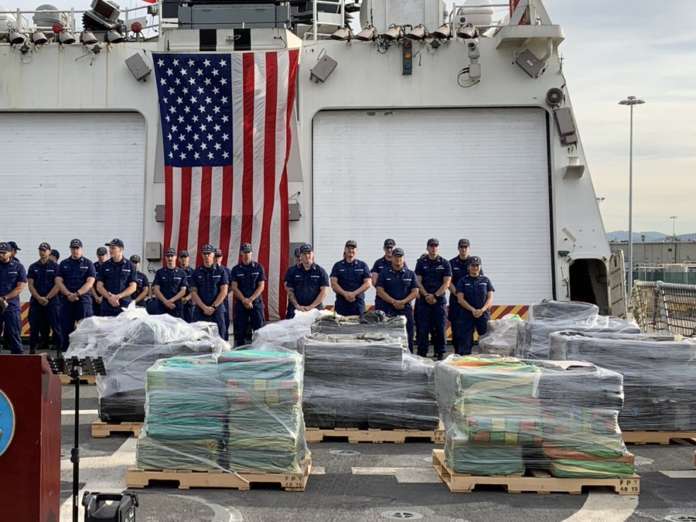 SAN DIEGO – The DEA and U.S. Coast Guard announced today a significant offload of drugs seized in international waters in the Eastern Pacific Ocean. Agents with the DEA and the crew of the USCG Cutter Bertholf offloaded 18,000 pounds of cocaine – worth an estimated $312 million – at the Tenth Avenue Marine Terminal in San Diego.

“Disrupting the maritime networks responsible for moving vast quantities of drugs on the high seas is one important way that DEA helps stop the flow of cocaine and other dangerous drugs to the United States,” said DEA Acting Administrator Uttam Dhillon. “The staggering amount of illegal drugs offloaded today is a testament to our strong interagency partnerships – in the U.S. and abroad – and the success that can be achieved when working together to stop this threat to our country.”

The @uscg Cutter Bertholf crew to offload +18,000#s of cocaine in San Diego today worth ~$312M! The cocaine was seized in intl. waters in the E. Pacific Ocean; the result of seven separate interdictions and disruptions by five cutters off the coasts of Mexico, C. and S. America pic.twitter.com/jg16B610QJ

Numerous U.S. agencies from the Departments of Justice, Defense, and Homeland Security cooperate in the effort to combat transnational organized crime. The DEA, FBI, USCG, Navy, CBP, and Immigration and Customs Enforcement, along with allied and international partner agencies, play an important role in counter-drug operations. The fight against drug cartels in the Eastern and Western Pacific requires unity of effort in all phases from detection, monitoring and interdictions, to criminal prosecutions by U.S. Attorney’s Offices in districts across the nation.

During at-sea interdictions, a suspect vessel is initially detected and monitored by allied, military, or law enforcement personnel coordinated by Joint Interagency Task Force-South based in Key West, Fla. The law enforcement phase of counter-smuggling operations in the Eastern and Western Pacific is conducted under the authority of the 11th Coast Guard District, headquartered in Alameda, Calif. The interdictions, including the actual boarding, are led and conducted by members of the U.S. Coast Guard.