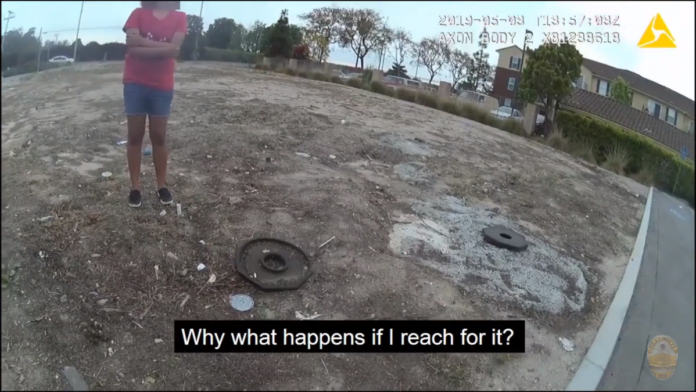 CALIFORNIA — (Scroll Down For Video) –– During the morning hours of Friday, May 3, 2019, the Oxnard Police Department’s dispatch center received multiple calls from a female reporting a woman with a knife in the area of 1835 San Gorgonio, and then behind the Carl’s Jr. on the 400 block of North Rose Avenue. The female was described as being 18 years in age, wearing a red shirt and blue shorts. During the first call to the dispatch center, it was reported that she “seems disturbed” and that she was walking around and waving a knife. The caller also indicated that the female was possibly armed with a gun. The caller recontacted dispatch three (3) additional times, and during these calls stated that the female was “getting increasingly worse” and that she was screaming and threatening people.

Oxnard Police Officer Timothy Roberts arrived on scene first, and made verbal contact with a female in the dirt field behind the business. The female approached, and then brandished a large kitchen knife (pictured below) at the officer. The officer drew his handgun and made several verbal requests for her to drop the weapon. The female ignored and expressly refused the officer’s requests, and began to advance on him. The officer retreated in an attempt to create space between them. The officer continued to give the female verbal commands to drop the weapon as he retreated backwards through the parking lot. As the second officer arrived on scene and was retrieving a “beanbag” shotgun, the female ran directly towards Officer Roberts with the knife in her hand. Officer Roberts fired his weapon, and the female was struck by gunfire. Officers promptly rendered first aid to her until medical personnel arrived on scene.

The female’s face has been blurred because of her age. Audio that identifies her by name has also been redacted. During the incident, the female brandished a large kitchen knife. During the investigation, detectives determined that the multiple calls made into the Oxnard Police Department’s dispatch center came from the phone that was in the female’s possession. Detectives have also discovered evidence that supports the position that the female deliberately intended to be shot by an officer. At the time of this news release the female is in an area hospital in “critical but stable” condition. A criminal investigation is continuing. Officer Roberts has been employed by the Oxnard Police Department since 2015, and is currently assigned to the Department’s Patrol Division. At the time of this update, he is on paid administrative leave, which is standard procedure for officer-involved shootings.