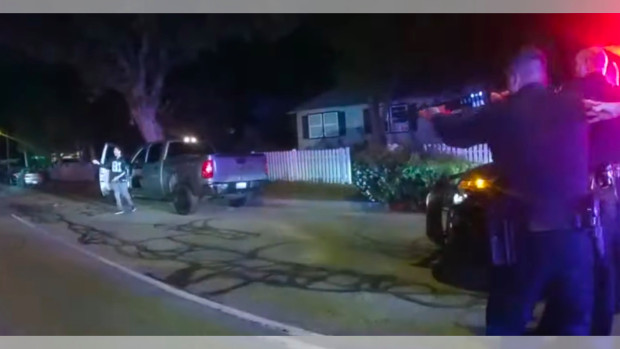 Fullerton, California — On Sunday, May 3, 2020 at approximately 9:27 PM, Fullerton Police Corporal Matthew Green, and Officer Rene Valdes, responded to assist an officer who was attempting to detain two males who appeared to be involved in an altercation in the 2200 block of E. Commonwealth Ave. One of the males was armed with a stick, and the other male, later identified as Jesus Estrada Leon (26, Fullerton), was armed with a large “butcher” type knife.

It was later determined that both males were family members, and Leon was attempting to carjack the vehicle from his relative. Officers attempted to de-escalate the situation; however after speaking to Leon for several minutes, Leon only became more agitated and aggressive in his actions. As you will see in the video, officers initially utilized two less lethal bean bag rounds in an attempt to stop Leon’s advance; however, after being hit with the less lethal bean bag rounds, Leon began to advance on a separate group of officers who were attempting to detain his relative. This action resulted in an Officer Involved Shooting (OIS). Leon later passed away at area hospital.