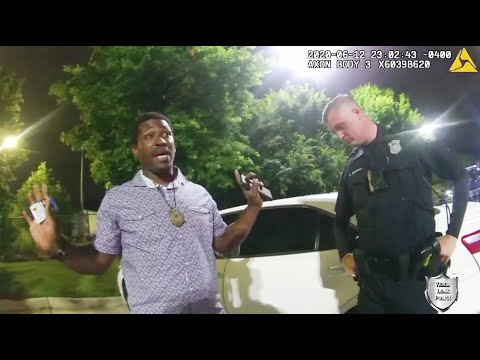 ATLANTA — Bodycam footage has been released from the Rayshard Brooks shooting, and the scenario is not what the mainstream media and Black Lives Matter is telling you.

The footage shows Brooks passed out in the driver’s seat of his vehicle, at 10:33 p.m. Friday, blocking the Wendy’s drive-thru off University Ave near I-75/85, according to WXIA.

Officer Devin Bronsan is seen banging on the window and eventually opening the door to check on the unresponsive Brooks.

After awakening him, Bronson tells Brooks to move his car and park legally, but Bronson smelled alcohol from Brooks and decided to investigate further.

Brooks then admits to drinking, and Officer Garrett Rolfe arrives on the scene and gave Brooks a breathalyzer – which showed a reading of .108% BAC, which is above the legal limit.

Brooks is then told he is under arrest, and immediately begins fighting when officers who were attempting to place him in handcuffs. He managed to grab one of the officer’s tasers after the officer removed it to use it on him.

He starts running with the Taser in his hand with Officer Rolfe in hot pursuit.

Surveillance video shows that Brooks turned over his shoulder and fired the taser at Officer Rolfe.