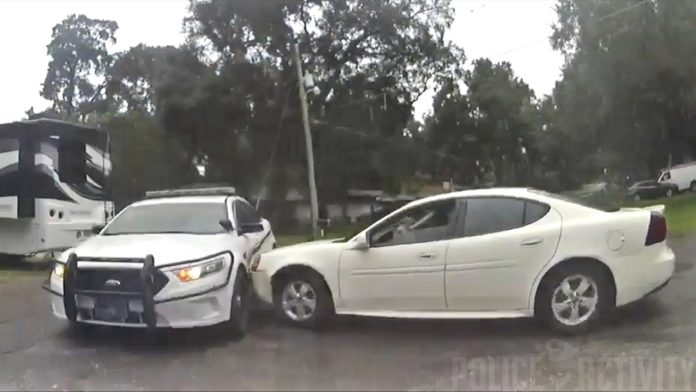 Marion County, Florida — On October 4, 2020, Deputy Elliott of MCSO responded to a residence in reference to a call about a disturbance. When he arrived to check on the individuals at the location, Geoffrey Gomm punched a window from inside the residence. Deputy Elliott remained persistent and attempted to communicate with Gomm as he exited the residence while trying not to escalate Gomm’s erratic behavior.

Gomm resisted Deputy Elliot’s attempts to calm him down and speak with him, then entered his own vehicle. Gomm then rammed his vehicle into Deputy Elliott’s patrol car, (which was unoccupied). Gomm then backed up and rammed the patrol car a second time, which caused extensive damage to the driver side deploying the air bags. Deputy Elliott was ultimately able to get him to exit the vehicle and eventually comply with commands. As it is seen in the video, Gomm remained highly verbal and aggressive towards all individuals in the area. Gomm was placed under arrest for Felony Criminal Mischief, Resisting without Violence and transported to the Marion County Jail, where he is being held without bond.