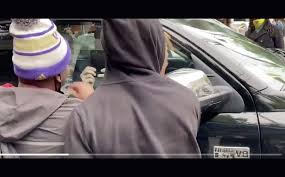 An exchange between a Fox News reporter and a crowd outside the Occupied Zone in Seattle escalated to a point where the reporter barricaded himself in his car. The protesters say they approached correspondent Dan Springer to complain about Fox News’ coverage of the autonomous zone. Protesters urged Springer to leave but he didn’t budge.