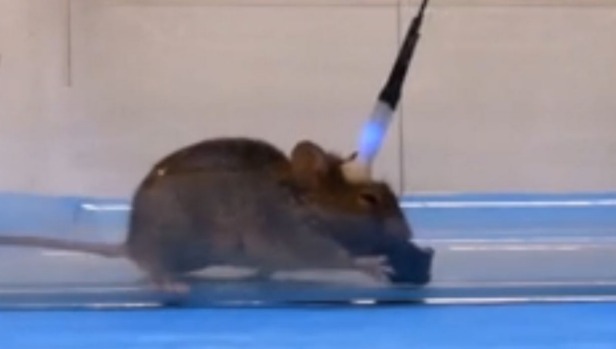 You’ve never seen such a sight in your life.

A team of scientists used brain control to turn about a dozen ordinary mice into killing machines. They employed a technique called optogenetics that manipulates neurons using light to make the fluffy critters go all Hulk on prey.

With the switch off the light, the mice were mostly chill, sometimes even scurrying around their cages to avoid prey or toys made to resemble prey. But when the switch was on, things got ugly. Crickets in cages were attacked and beheaded, and plastic toys that looked like prey received powerful bites that would’ve been lethal.

The scientists are not trying to create a monster. “Basically, we are trying to understand how large brain networks work,” said Ivan de Araujo, an author of the study, published Thursday in the journal Cell. Araujo, an associate professor of psychiatry and physiology at Yale University, and his co-authors, Wenfei Han of Yale and Milton Canteras, a neurobiologist at the University of São Paulo, sought to answer a long-standing question in their field: What parts of the brain trigger certain motor responses.

In neurobiology, studying the complex brain functions that govern predatory behavior is a good way to do that.

Predatory behavior involves complex motor actions, and studying it can help neurobiologists determine how different parts of the brain organize the see-how-they-run impulse to hunt, track, pounce, bite and kill. Over the three years of the study, Araujo observed signals that controlled the necks of the mice, their head positioning and movement of their jaws.

“We . . . targeted the groups of neurons that control predatory hunting, pursuit, capture and killing,” Araujo said. The team attached a sensory device to the rodents’ heads and pulsed blue light that activated neurons that had been engineered to respond to light, triggering the killing instinct.

A question had to be asked: Was there a broader purpose to this research, such as expanding the use to humans to, say, create better warriors? Araujo said the question was perfectly understandable, then flatly answered no. While humans have brain regions analogous to those in other animals such as mice, optogenetics doesn’t appear to have a military application.

“We didn’t see mice attacking other mice,” he said. “It produced very strong, aggressive behavior toward other animals.” And mice didn’t appear willing to bite off more than they could chew. “They didn’t attack other mice or something too large to be reasonable prey. There are some constraints,” Araujo said.

But heaven help the bite-size prey of a mouse that has seen the blue light. Not only were they more vicious than mice whose neurons were not manipulated, but they also were more eager hunters. Mice usually paw at their insect prey seeking the head before delivering a fatal bite. The lab mice didn’t seem to care about the head – they wanted to rip out the first body part they touched.

Even toys weren’t safe when the light was on, whether they were motorized or lying still. When the researchers left the light on for them, “They changed completely from avoidance to motor behavior displayed when they naturally hunt an insect.”

It was the kind of “you won’t like me when I’m angry” transformation that Bruce Banner underwent when he became a raging green monster.

“Their bite force is kind of powerful and pretty sufficient,” Araujo said of normal mice. “When we stimulated these neurons, we observed that the muscles were contracting much more strongly, the bite force was more powerful.”