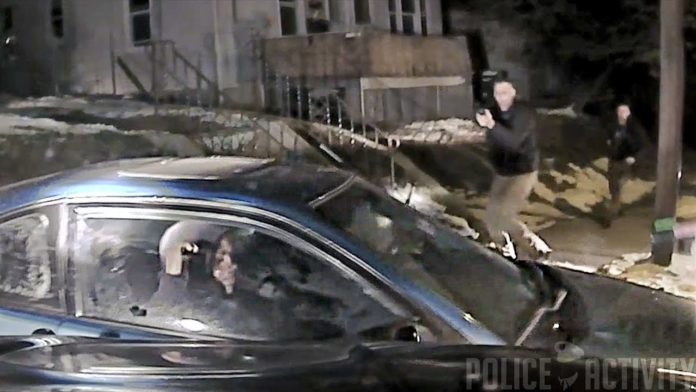 New Britain, CT. — (Scroll Down For Video) — During the evening shift hours on Thursday, December 14, 2017, the New Britain police added four unmarked vehicles and one marked vehicle to the patrol force in an attempt to locate individuals wanted in connection with a series of carjackings and robberies that had occurred recently in New Britain and nearby cities. In one incident, passengers in a vehicle were robbed at gunpoint while a female passenger was forcibly groped and subjected to degrading sexual comments about her body. In another incident, the victim was “pistol whipped.” In a third, which occurred in the evening hours of December 11, 2017, the victim was attempting to back out of her driveway when a vehicle pulled behind her and blocked her exit. She reported that three or four individuals exited the vehicle and approached her car. Two of the individuals began to strike the car with guns. The victim managed to flee her assailants, who opened fire on her vehicle as she was escaping. At least one gunshot struck her vehicle.

Prior to the beginning of their shift on December 14 officers were briefed at roll call that the vehicle used by the individuals who were responsible for this incident was a Toyota Paseo with a New Hampshire registration plate.

At approximately 1830 hours, officers in the Acura (Ratajczak, Silverio, and Slavin) were patrolling the streets of New Britain when they observed a Toyota Paseo, color green, bearing New Hampshire registration #1810922. They noted that the vehicle appeared to be occupied by three people, and requested additional backup. While awaiting a response, they observed the Toyota appearing to “case” the neighborhood.

The Paseo then drove North on Chapman Street, approaching the traffic light on Newington Avenue, followed by the Acura, Camry and both unmarked Ford vehicles.

The Camry drove ahead in an effort to block in the suspect vehicle. Immediately in front of the Camry, a marked K9 unit (Officer Brandon Egan) and another marked patrol car (Sgt. David Mocarsky) turned onto Carlson Street. Soon after, two more marked vehicles arrived on the scene (Officer Ryan Coleman and Sgt. George Kozieradzki).

Detective Ratajczak struck the suspect vehicle’s rear bumper in an apparent effort to prevent its escape. At this point, the suspect vehicle reversed in an apparent effort to turn around. As it executed this turn, it struck both unmarked vehicles and became stuck on a front lawn embankment of one of the residences on Chapman Street. Officers exited their vehicles with their weapons drawn and began to yell commands to the vehicle occupants.

The vehicle became stuck on an embankment while the operator revved the engine in an attempt to free the vehicle. While it remained stuck, a police vehicle made contact with the passenger side of the suspect vehicle, allowing the suspect vehicle to gain traction and the driver pitched forward, driving back down Chapman Court.

The Paseo then moved past Detective Jones and turned towards Detective Kiely who fired three times in quick succession. Other officers fired as the vehicle continued down the sidewalk and street. Eventually the suspect vehicle struck an unoccupied pick-up truck and came to a stop.

The vehicle appeared disabled but the engine continued to rev. The front seat passenger, later identified as Caleb Tisdol, was kicking at the windshield, while the backseat passenger, later identified as Noah Young, attempted to crawl out the rear window. As officers approached the vehicle, the front seat passenger placed his hands in the air. The back seat passenger was apprehended by Detectives Smith and Nelson. Other officers removed the driver who had obviously sustained serious injuries. Once all occupants were out of the vehicle, officers observed injuries to both the driver and front seat passenger. Officers notified EMS and provided on-scene aid. Audio from the recorded video reflects immediate and repeated calls by police for medics. Officers can also be heard calling for tourniquets and QuikClot. [2]