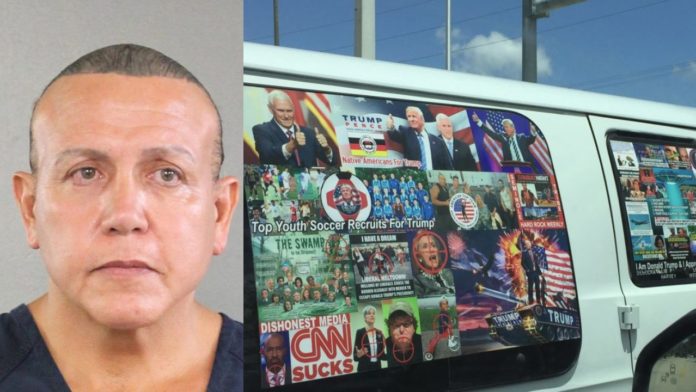 FLORIDA — The man suspected of sending nearly a dozen explosive devices to top democrats and CNN this week has been captured by federal authorities in Plantation, Florida.

The suspect has been identified as 56-year-old Cesar Sayoc Jr. of Fort Aventura, Florida.

Local news cameras showed law enforcement officials cover what appeared to be Sayoc’s van with a blue tarp. Before the van was covered, images appeared to show the vehicle covered in stickers and photos of President Donald Trump–including markings of the Presidential Seal.

WATCH: FBI agents cover up van near site where mail bombing suspect was taken into custody.

He will reportedly face charges in connection with wave of pipe bomb packages sent across the US. pic.twitter.com/qFUmV3a6eZ

BREAKING IMAGES: White van allegedly belonging to package-bomber appears to have photos of Trump, Presidential seal in the windows pic.twitter.com/z3TMfBuHiY

NEW PHOTOS: Suspect van that was seized during investigation into series of mail bombs

Sayoc is a ‘former New Yorker,’ according to WNBC. Online voting records indicate he has voted Republican. He was arrested in Miami in 2002 for a bomb threat and was sentenced to probation.

Officials say DNA evidence on one of the devices and a fingerprint on an envelope played a role in identifying Sayoc.

JUST IN: FBI: Fingerprint found on a pipe bomb package that was sent to Rep. Waters of California was determined to be from the suspect, Cesar Sayoc Jr. pic.twitter.com/6fQsWeMLJI

JUST IN: The Dept. of Justice says Cesar Sayoc faces up to 58 years in prison on 5 charges https://t.co/K4O58SgOPK pic.twitter.com/T5fEGJnxFK

FBI Director Wray: 13 IEDs were sent to various individuals across the country. Each device consisted of roughly 6 inches of PVC pipe, a small clock, a battery, some wiring and what is known as energetic material.

“These are not hoax devices.”pic.twitter.com/pEj7ARs0kD

No one has been injured in the attempted attacks, which prompted an investigation by the Federal Bureau of Investigation.

Officials at the Justice Department are scheduled to hold a press conference at 2:30 PM ET.