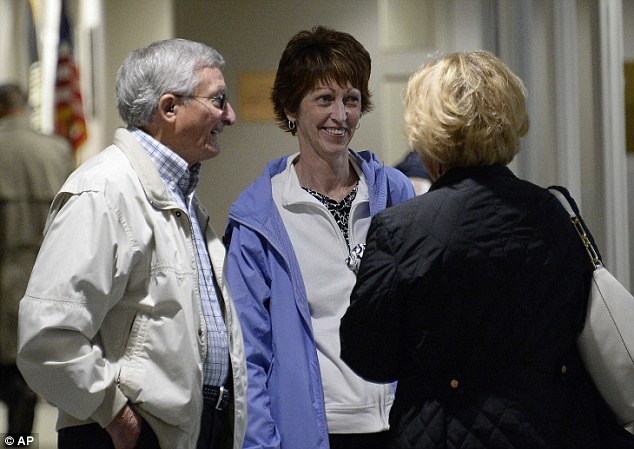 Bonnie Liltz, it seemed, had reached a desperate moment.

At home in a Chicago suburb late last spring, Liltz penned a final note to her family, authorities said.

“I am so sorry to put you all through this but I can’t leave my daughter behind,” she wrote, according to court documents cited by the Chicago Tribune. “I am having difficulty breathing now,”

She added: “If I go first, what will happen to her? I don’t want her to live in an institution for the rest of her life. She is my life.”

For years, Liltz’s lawyer said, the single mother had been battling cancer and other lingering health issues; at the same time, she was caring for her adult daughter, Courtney, who had cerebral palsy and severe mental and physical disabilities that left her dependent on Liltz for everything.

During her own health crisis in May 2015, her lawyer said, Liltz thought she might soon die and was worried about who would care for Courtney after she was gone.

Police said Liltz crushed up various medications and poured the powder down her 28-year-old daughter’s feeding tube – then swallowed the remaining concoction with a glass of wine.

After pleading guilty to involuntary manslaughter in her daughter’s death, Liltz, 56, appeared in court late Wednesday and told the judge she wished she could “turn back the clock,” according to the Tribune.

She appeared willowy and frail.

“I thought . . . I was dying,” Liltz said, according to the Tribune. “I prayed to God, ‘What’s going to happen to Courtney?’ I was scared and overwhelmed. I couldn’t bear the thought of her in an institution for the rest of her life.”

“I felt the only place she would be safe would be in heaven with me,” she added. “I have a pain inside that is beyond words. I pray every day that someday we will be together again.”

The judge will decide a sentence next week.

Liltz’s case has upset some observers who say that while they sympathize with the struggles of parents with profoundly disabled children, they can not comprehend taking the life of one.

Tony Paulauski, executive director of the Arc of Illinois, an advocacy group for people with disabilities, told the Chicago Tribune last year that “the most pressing issue a mom or a dad has is what’s going to happen to their children when they’re no longer able to care for them. That is a major concern.”

But, Paulauski said, there’s no excuse in such cases.

“There’s no reason for murdering a child,” he said at the time. “There are always other options.”

Liltz’s attorney argued that her options were limited.

She had adopted Courtney as a small child. Thomas Glasgow, Liltz’s attorney, told The Washington Post that the child’s birth mother had given her up for adoption because of her disabilities; an adoptive family then returned her, not having realized the severity of her challenges.

Glasgow said Courtney’s capabilities did not extend beyond a toddler’s.

She could not walk or talk.

She could not eat normally.

She could not use a toilet.

“She took on somebody nobody else would take on,” Glasgow said of Liltz.

In court, witnesses described Liltz was a model mother who kept Courtney clean, well-dressed and well-fed. Courtney, despite her challenges, was seemingly happy – spending her time watching Bert and Ernie, or playing on the floor with her toys.

Gloria Cheever, a family friend, told the Tribune last year that the last time she saw Courtney, the young woman squealed in excitement and even got up and took a few steps.

“I don’t believe in breaking the law, but I do believe there’s a desperation point that people reach,” Cheever told the newspaper. “Bonnie deserves an award for the years of sacrifice she gave for her daughter.

“She is not a murderer.”

Prosecutors did not give any testimony or cross-examine Liltz’s witnesses who said she posed no threat to society, according to Chicago’s Daily Herald. The prosecutor’s office declined to comment on the case to The Washington Post.

Glasgow said Liltz has been battling her own health issues since she was a teenager, when she was diagnosed with Stage 3 ovarian cancer.

Glasgow said Liltz underwent intense radiation therapy, which burned her intestines and caused lasting intestinal issues; she also had a hysterectomy that prevented her from having children of her own.

In 2012, Glasgow said, Liltz’s cancer returned and she was hospitalized during treatment.

During that time, he said, Courtney was placed in a state institution.

After Liltz was released, she went to get her daughter – and found her pushed into a corner at the facility, Glasgow said. He said her clothes were stained with drool, her hair was wet and she was sitting in her own filth.

“Bonnie was distraught because the child wouldn’t even look at Bonnie anymore,” Glasgow said. He added: “Bonnie became very protective over Courtney.”

Then last year, Liltz found herself back in the doctor’s office.

Glasgow said she was told that due to her chronic intestinal issues, she needed to take “profound corrective measures” and “there weren’t any guarantees.”

Liltz went home and fed and bathed her daughter, and the two went to bed, Glasgow said. Hours later, he said, Liltz woke up covered in her own diarrhea.

“She came to the realization that the doctor was right,” Glasgow said about Liltz, adding: “She made a decision based on what she thought was best for her child.”

Authorities as well as Liltz’s own attorney said the mother administered a lethal cocktail of drugs to her daughter and then to herself – attempting to commit suicide.

On a Wednesday afternoon in May 2015, officers responded to a call about a medical emergency at Liltz’s condominium in Schaumburg, not far from Chicago, police said at the time.

When officers arrived, they found Liltz and her daughter, Courtney, unconscious in their beds.

Police said it appeared to be an overdose of various medications.

At her sentencing hearing late Wednesday afternoon, Liltz told the judge that her daughter was never a burden and that she wished she could care for her again.

“I was Courtney’s mother,” Liltz said in court, according to the Tribune. “I fed her, I dressed her and I loved her.

“Nobody in this courtroom could know how I loved her and how she loved me.”