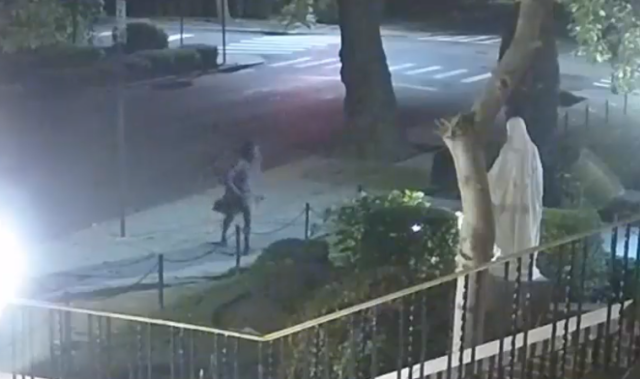 Queens District Attorney Melinda Katz announced today that Jacqueline Nikiena, 23, has been charged with criminal mischief as a hate crime for destroying two statues in front of a church in Forest Hills, Queens. The defendant allegedly pulled down the statues and bashed them to pieces early Tuesday morning in July 2021.

District Attorney Katz said, “This defendant allegedly smashed two statues that were beloved touchstones at this Forest Hills church for decades. The Virgin Mary is a sacred figure for Catholics and those of many faiths. This act struck beyond the value of broken property and deeply rattled an entire community’s sense of safety.”

Nikiena, of Olcott Street in Forest Hills, was arraigned last Saturday before Queens Criminal Court Judge Jeffrey Gershuny on a complaint charging her with criminal mischief in the second degree as a hate crime and aggravated harassment in the first degree. Judge Gershuny ordered the defendant to return to Court on October 12, 2021. If convicted, Nikiena faces five-to-15 years in prison.

According to the charges, at approximately 3:30 a.m. on July 17, 2021, in front of Our Lady of Mercy Roman Catholic Church on Kessel Street in Forest Hills, the defendant is observed on video surveillance approaching two statues depicting the Virgin Mary which are valued at more than ten thousand dollars. The defendant allegedly pulled the two statues down to the ground and briefly dragged them before breaking them into several pieces.

The investigation was conducted by Detective Gregory Wilson of the NYPD’s Hate Crimes Task Force.