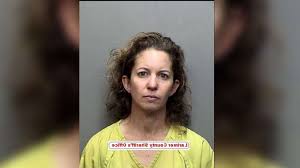 On November 5, 2019, Jennifer (Tjornehoj) Katalinich, 42, of Erie, CO was arrested on a felony warrant regarding the 1996 “Baby Faith” case. Katalinich was booked into the Larimer County Jail on allegations of CRS 18-3-102 Murder in the First Degree and CRS 18-3-103 Murder in the Second Degree. She posted $25,000 bond and was released. A booking photo is attached.

The “Baby Faith” case began on August 24, 1996 when LCSO received a report that two 11-year-old boys discovered the body of a newborn female in Horsetooth Reservoir. Larimer County Park Rangers, deputies, and investigators responded and learned the infant was found inside a plastic trash bag. An autopsy was later performed by Dr. Amy Lewellyn of the Larimer County Coroner’s Office. Dr. Lewellyn determined the cause of death was asphyxia/suffocation and the manner of death was homicide.

As the investigation moved on, the infant became known as “Baby Faith.” Investigators established this case was not related to a similar case in Pueblo known as the “Baby Hope” case. Investigators aggressively pursued all leads in the coming months, but eventually all leads were exhausted, and the case was declared cold.

Through donations from the community and help from a local church, a funeral service was held for “Baby Faith” and a grave marker was erected where she was laid to rest in the Roselawn Cemetery in Fort Collins.

On August 24, 2006, investigators reopened the “Baby Faith” case in hopes advances in DNA technology could produce new leads. They also hoped that reopening the case on the 10-year anniversary would generate new tips and leads from the public. Unfortunately, no new information surfaced that would further the investigation.

In of November of 2016, investigators decided to resubmit evidence containing DNA to the Colorado Bureau of Investigation for updated analysis and CBI continued analyzing the DNA.

On July 17, 2019, CBI met with LCSO investigators and reported there were a total of five individuals with a probability of being related to “Baby Faith.” Further research revealed four of those individuals were most probable to have information to advance the investigation.

On November 1, 2019, a warrant was issued for Katalinich for Murder in the First Degree and Murder in the Second Degree. She surrendered on November 5, 2019 and was booked into the Larimer County Jail.

Investigators did not reveal if Katalinich was the mother of the child. A motive remains unknown.