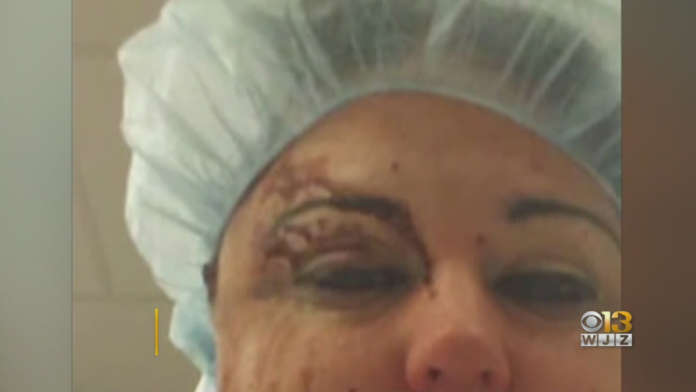 BALTIMORE — Roderick King was sentenced to life plus 65 years. In July, King was convicted of attempted first-degree murder, first-degree assault, armed carjacking, armed robbery, use of a firearm in a crime of violence among other charges for a carjacking and attack that took place in the Highlandtown community in the spring of 2018.

“Roderick King’s lengthy prison sentence is justified and appropriate, “commented Assistant State’s Attorney Matt Pillion, who prosecuted this case. “King is a BGF gang member who has repeatedly hurt people and ignored our laws. When he chose to attack Ms. Woodyard, he impacted her life forever. Justice demands as a consequence that he should live with his choices forever too. I hope his sentence brings some measure of healing and closure for Ms. Woodyard, her family, and for the families who live and work in Highlandtown.”

On April 22, 2018, shortly before 1:30 AM, the victim was leaving her job at a local pizza shop in the 400 block of S. Conkling Street of the Highlandtown neighbourhood. When she reached her car, Roderick King and a female approached her. King flashed a black handgun and demanded the victim’s purse and car keys.

When the victim tried to escape from her car a struggle ensued between her and King. King’s female accomplice entered the rear driver’s side seat when King jumped into the driver’s seat and pistol-whipped the victim. The victim was able to roll out of the car; but, as she tried to rise from the ground, King shot her at close range in the head. The victim, still conscious, ran across the street to another restaurant where a family member was working. There, at the restaurant, the victim collapsed. Medics soon arrived and took the victim to Johns Hopkins Hospital for treatment.

Later on in the day, a homeowner in the Rosedale community reported a blood splattered car abandoned in front of her house. Baltimore County authorities ran the tag information and identified it as the victim’s car, which was reported stolen.

BPD Detectives were able to obtain surveillance video from local businesses near the crime scene that captured footage of the attack. The footage showed that King and his female associate walked along Eastern Avenue eastbound before reaching Conkling Street. The pair then turned north onto Conkling, attacked the victim, and then fled in the victim’s car toward Pulaski Highway. Detectives circulated flyers, video and still images of the duo to the local news outlets and social media. Several days later, the victim was able to identify the defendants through images that she discovered on social media.

Detectives collaborated with U.S. Marshals, and eventually located the duo in South Carolina where they fled and stayed with a relative.

“ASA Pillion and this dedicated team of Baltimore Police detectives and officers, along with the State’s Attorney’s victim advocates ensured that justice prevailed and are to be commended,” said Chief of the Gun Violence Enforcement Division, Charles M. Blomquist. “While we know that a successful prosecution will never undue the trauma and hurt King’s victims experienced at his hands, we trust that knowing that his violence can never darken a Baltimore City again provides some solace.

“Community participation and collaboration is at the core of public safety. This case proves what can happen when law enforcement, the public, and crime victims come together to bring down violent criminals,” said State’s Attorney Marilyn Mosby. “King was rightfully brought to justice to the fullest extent of the law, giving needed relief to a victim, her family and innocent citizens in the Highlandtown community and across Maryland. I applaud BPD detectives and my dedicated prosecutors for their hard work towards victory in this case.”