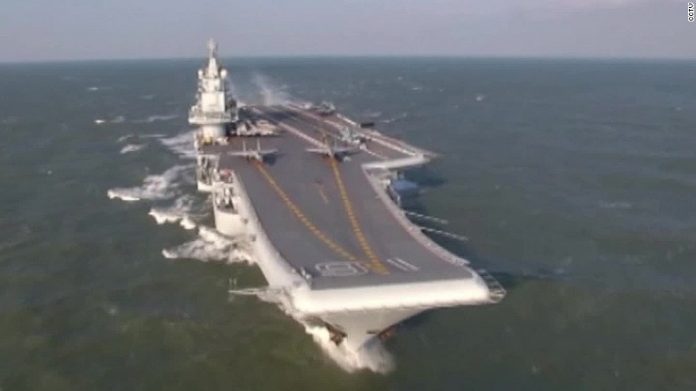 The world’s most dangerous flashpoint got much more dangerous Thursday when China sent its lone aircraft carrier into the Taiwan Strait and Taiwan scrambled fighter jets in response. This is how accidental wars start: provocation and counterprovocation in an environment with too much uncertainty. The uncertainty arises from not knowing the Donald Trump administration’s answer to a pressing foreign policy question: Would the U.S. defend Taiwan from a Chinese attack?

The answer as a matter of U.S. policy has long been complicated. Legally, the U.S. has no treaty obligation to defend Taiwan, and the Taiwan Relations Act of 1979 says only that the U.S. would view an attack with “grave concern.” Analysts refer to this as a policy of “strategic ambiguity.”

In practice, however, the diplomatic and defense establishments have long assumed that the U.S. would defend Taiwan as vigorously as it would Japan or South Korea, with which it has mutual defense treaties — for the simple reason that failing to defend Taiwan would be seen as a signal that the U.S. might not defend its official Pacific friends.

Trump’s election may well change this calculus — and no one in the region, or the U.S., knows for sure. On the one hand, Trump’s secretary of state nominee, Rex Tillerson, took a tough line at the beginning of his Senate confirmation hearings Wednesday. He compared China’s expansive, aggressive actions in the South China Sea to Russia’s in Crimea, which certainly would go along with a commitment to defend Taiwan.

On the other hand, Trump himself was dismissive of a recent Chinese military provocation, the seizing of a water-borne U.S. drone from near a naval warship in December, commenting that China could keep it. That implied a shift from past U.S. policy: Where George W. Bush and Barack Obama sought to contain China militarily while welcoming its economic growth, Trump seems inclined to go the other way. He sees China as an economic threat while appearing thus far uninterested in military confrontation. And his generally isolationist-tilting foreign policy views would similarly suggest a disinclination to defend Taiwan.

In other words, Trump’s administration may be readying itself for a historic shift in U.S. defense posture toward China in the Pacific. Or maybe not. The point is that the heightened uncertainty has practical implications.

China can be expected to keep on testing Trump, especially given his anti-Chinese rhetoric during the campaign and his appointment of a staunchly anti-Chinese academic, Peter Navarro, to lead his trade council.

From China’s perspective, military and economic confrontation can be deployed as useful proxies for each other. When Trump challenges China on trade, as with the Navarro appointment, China can respond by revealing antiaircraft guns on its newly created islands in the South China Sea — or by sending a carrier into the Taiwan Strait. Neither of these upsets China’s precarious domestic economy, but each is intended to send Trump a message.

As uncertainty makes China more aggressive, it will have an identical reciprocal effect on Taiwan. Taiwan’s leadership cannot know exactly how far China is prepared to go. Without the high probability of U.S. support, Taiwan must try to deter China’s behavior by itself.

Mutual provocation is scary because it can lead to accidents. Planes and ships can smash into each other, and split-second decisions can lead to disaster.

What’s more, uncertainty itself can contribute to wars that both sides would rather not fight. According to one classic account, one reason rational countries nevertheless go to war is when each side has its own assessment of the relative strengths and weaknesses. Different assessments can lead to situations where the only way to find out who is right is to fight the war and see who wins. If China and Taiwan have strongly different assessments of what Trump’s policy would be, that increases the odds of war between them.

What makes this high-risk environment into something like a perfect storm is the presidency of Tsai Ing-wen, who took office last May. Tsai and her Democratic Progressive Party are far more independence-oriented than any of her predecessors.

To be sure, Tsai has tried to tread carefully since her election, avoiding direct provocation of China, which views Taiwan as ultimately part of China. Yet in the final analysis, the existence of Tsai’s party depends on the basic assumption that Taiwan is an independent country — and a democracy. That vision puts Taiwan on a collision course with Chinese President Xi Jinping’s vision of an increasingly nationalist and expansionary China.

In 2013, when I was trying to imagine the highest risk scenario for a China-Taiwan war, I postulated one in which Tsai was president of Taiwan and China sent its new carrier into the Taiwan strait. That’s now happened. The question is what, if anything, Trump is going to do about it. The answer is much more important for the world than anything in the disputed dossier that’s dominating the headlines.

– Feldman is a Bloomberg View columnist. He is a professor of constitutional and international law at Harvard University and was a clerk to U.S. Supreme Court Justice David Souter. His books include “Cool War: The Future of Global Competition” and “Divided by God: America’s Church-State Problem — and What We Should Do About It.”