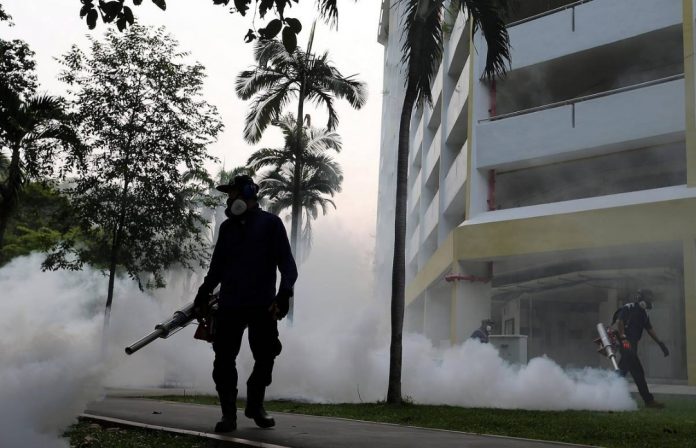 Just days after Singapore health officials announced a cluster of Zika cases among a group of foreign workers, its Asian neighbors were aggressively stepping up preventative measures similar to ones they undertook for Ebola and Middle East Respiratory Syndrome.

Indonesian rolled out thermal scanners at its main airports and ports such as Batam, an island nearest to Singapore. Malaysia began health checks for buses entering Johor Bahru, a city that an estimated 200,000 pass through during their commutes for work in Singapore.

South Korea, Taiwan and Australia issued travel advisories warning pregnant women and others about the situation in Singapore.

While the subtropical region is used to dealing with mosquito-borne infectious diseases such as dengue and slower-developing illnesses like HIV/AIDS, many countries’ surveillance systems are not set up to closely monitor the condition of pregnant women and their babies who are most vulnerable to the pathogen. One of the tricky things about Zika is that most people who get it don’t have any symptoms, and by the time traditional tracking methods such as those in emergency rooms pick up on groups of patients with the virus it has likely already spread throughout the population.

At the construction site where the Singapore cases were first seen, health authorities have set up a kind of informal quarantine. Work has been shut down and those with Zika have been given their own rooms in a dormitory with “Wi-Fi and their three meals delivered to them,” according to a description in the Straits Times.

All workers are getting their temperature taken twice a day, the newspaper added, and they have to apply mosquito repellent each hour and wear two types of patches with repellent. They are also given vitamin C each day.

It’s unclear how this will help combat Zika but the idea that the supplements can help with a related illness – dengue fever – is a common belief in Singapore just as the idea that it can help with the common cold is in the United States. Medical studies haven’t been able to confirm a link for either. However, vitamin C is a powerful antioxidant. As long as you’re not consuming megadoses (which can be harmful) nutrition science says a supplement can help round out a diet lacking in citrus and other foods rich in the nutrient to make sure you’re getting enough to support normal growth and development.

The number of confirmed Zika cases in Singapore is now up to 56. Most of those people have made a full recovery but a handful remain hospitalized.

According to the latest situation report from the World Health Organization issued Aug. 18, 67 countries have reported evidence of mosquito-borne Zika virus since 2015. Seventeen of them have reported babies being born with microcephaly or shrunken heads or other central nervous system malformations linked to Zika. The most numerous and severe cases have been seen in Brazil where the link between Zika and microcephaly was first established.

Eighteen countries and territories have reported an increased in incidence of Guillain-Barre syndrome or have confirmed Zika infection in people with the disorder, in which the body’s own immune system attacks nerves and can be life-threatening.