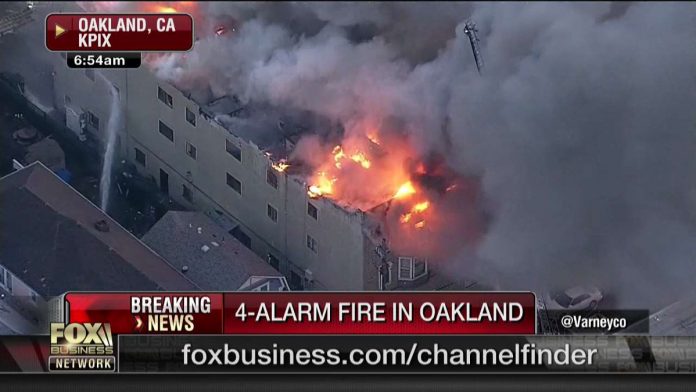 Before they saw the flames engulfing their building, residents of the three-story Oakland transitional housing complex heard only screaming.

People trapped in the apartments that housed about 100 people hung out of windows and knotted sheets into makeshift ropes to escape the massive blaze, which began ravaging the decrepit building at 5:40 a.m. Monday. Residents knocked on each other’s doors, yelling out “wake up!” and “fire!”

The blaze left three people dead, a fourth person missing, and dozens of residents displaced from their already shoddy living conditions in the building, which many said was not equipped with sprinklers or fire extinguishers.

“There were no fire alarms going off at all,” one second-floor resident, Gilbert Jones, told the East Bay Times. “As I walked out, you heard nothing.”

Firefighters rescued at least 15 people who had been trapped in the building while others fled through fire escapes, the San Francisco Chronicle reported. Four people, including two children, were hospitalized with smoke inhalation, Battalion Chief Erik Logan of the Oakland Fire Department said, but all were expected to be released. The cause of the fire is still under investigation.

The blaze broke out nearly four months after a warehouse called the Ghost Ship exploded in flames about five miles away, killing 36 people who attended a concert there. News of Monday’s fire heightened the already intense scrutiny on Oakland’s fire department and inspection programs, which were well aware of troubles facing the apartment complex, attorneys told The Washington Post.

The fire, which took place in a crowded complex that housed low-income people, once again underscored the shortage of affordable housing in the San Francisco Bay area. Dozens of squatters were apparently living in the apartment complex, a Red Cross official told the San Francisco Chronicle.

Over the past decade, the city has received 20 complaints about pest infestation, electrical issues, mold, trash, graffiti, floors caving in, urine and feces on the floors and others issues, the Mercury News reported.

“The place was disgusting,” James Cook, an attorney who has represented tenants of the apartment building where Monday’s fire occurred, told The Washington Post. “The most deplorable living conditions you could imagine.” It was riddled with exposed wire, overflowing toilets, and walls that were falling apart from water damage. “Rats, roaches, you name it.”

In recent weeks, fire inspectors visited the building on multiple occasions to check on possible code violations, Cook said. Following a Feb. 25 referral for a fire safety inspection at the building by the Fire Department, the Oakland Fire Prevention Bureau said it could not get inside, the Chronicle reported.

Three days before the blaze, fire inspectors found it lacked smoke detectors in each apartment and a working fire sprinkler system, among other violations, according to city documents obtained by the Associated Press.

In some ways, the Monday morning fire was more deplorable than the Ghost Ship blaze, Cook said, because the residents of the home were among the city’s most vulnerable – many were battling mental illness, drug addiction and homelessness.

“Certainly they had nowhere else to go,” said John Burris, an attorney whose firm is representing the families of two of the residents who died in Monday’s fire.

Immediately following the Dec. 2 Ghost Ship blaze, Oakland officials cracked down on warehouse spaces, artist collectives and other venues that may not have been up to code.

“Landlords everywhere were using Ghost Ship as a reason for eviction,” Cook said. One of these landlords was the owner of the building that caught fire Monday.

In the weeks leading up to the fire, dozens of its tenants had been entrenched in a fierce eviction battle with the landlord, Keith Kim. Kim leased the building to Urojas Community Services, a nonprofit that provided transitional housing to tenants on the building’s first and second floors.

On Dec. 11, Kim moved to evict the nonprofit, offering the Ghost Ship fire as its reason. On March 17, he gave Urojas Community Services a 30-day eviction notice, according to a letter attorneys provided to The Post.

Urojas Community Services founder and director the Rev. Jasper Lowery heaped blame on the landlord for the building’s dilapidated condition, and the group fought the eviction. As the lawyers said, the tenants had nowhere else to go.

Kim did not return calls from the Associated Press or the Chronicle.

Of the three people who died in Monday’s fire, the coroner’s office confirmed the identity of one, 64-year-old Edwarn Anderson. The East Bay Times reported that Cassandra Johnson, 50, was identified as deceased by her family members.

Johnson’s brother-in-law Tywan Lee said Cassandra had called his mother when the fire broke out.

“She had called my mom, screaming talking about the dog is dead and she’s trapped,” Lee told the East Bay Times.

Mark Doleman, 50, who lived on the second floor, told the East Bay Times he woke up, grabbed his wife and fled down the fire escape.

“I could see the flames coming toward me,” Doleman said. “Right now we have no clothes, no ID or driver’s license, nothing.”

His wife, Sheila, suffers from a chronic obstructive pulmonary disease and had a stationary oxygen machine and two portables in their apartment, he said.

One resident, who identified only as Lexy, told the San Francisco Chronicle that she and others had been calling health inspectors “for a really long time” about the issues in the dilapidated apartment building.

“It’s sad that something this unfortunate had to happen for the rest of the world to see how we’ve been living,” Lexy said.

“People should’ve been helping us,” she added. “Where have they been at?”