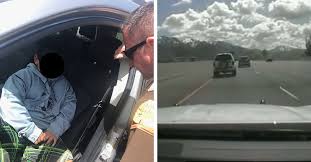 As Trp. Morgan approached the driver-side of the vehicle on foot, he noted that it was strange that he could not see the head of the driver from the rear window. The explanation for that came quickly, as Trp. Morgan looked into the driver side window and saw a very young boy as the sole occupant/driver of the vehicle. Trp. Morgan was able to determine that the boy was 5 years old and that he was on his way to California to a relative’s home. The boy’s intent was to buy a Lamborghini sports car with the money, $3 dollars, that he had in his wallet. Trp. Morgan and assisting troopers were able to locate the boy’s parents and get him and their SUV home safely.

The family reported that the boy’s older sibling was watching him that morning, the sibling fell asleep and the the boy took the keys to the SUV off of a hook in their home, he started the vehicle and began his short journey from near 17th and Lincoln in Ogden to southbound I-15 (the correct path to California) near mile post 342 where he was stopped by Trp. Morgan. Police estimate the distance traveled by the 5-year old to be about 2-3 miles. No one was hurt and no property was found damaged during his short outing.

At this time, no citations have been issued and no charges filed on the boy or his family.