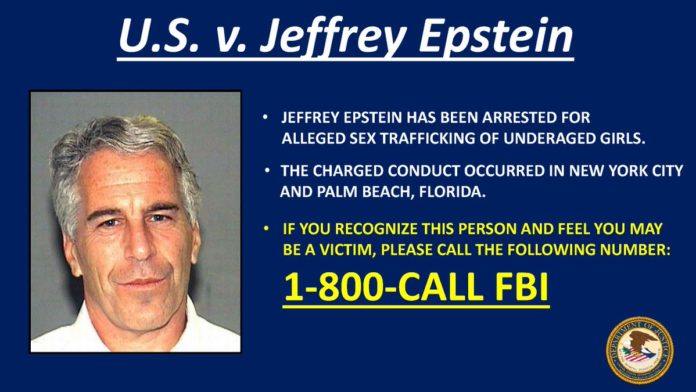 The indictment unsealed today alleges that, between 2002 through 2005, Epstein sexually exploited and abused dozens of underage girls by enticing them to engage in sex acts with him in exchange for money. Epstein allegedly worked with several employees and associates to ensure that he had a steady supply of minor victims to abuse, and paid several of those victims themselves to recruit other underage girls to engage in similar sex acts for money. He committed these offenses in locations including New York, New York, and Palm Beach, Florida. Epstein pled not guilty.

U.S. Attorney Geoffrey S. Berman said: “As alleged, Jeffrey Epstein abused underage girls for years, operating a scheme in which girls he victimized would recruit others for Epstein to exploit and abuse. Epstein exploited girls who were vulnerable to abuse, enticed them with cash payments, and escalated his conduct to include sex acts, often occurring at his residence on the Upper East Side of Manhattan. While the charged conduct is from a number of years ago, the victims – then children and now young women – are no less entitled to their day in court. My Office is proud to stand up for these victims by bringing this indictment.”

FBI Assistant Director William F. Sweeney Jr. said: “We are asking anyone who may have been victimized by Jeffrey Epstein, or anyone who may have information about his alleged criminal behavior, to please call us. The number is 1-800-CALL-FBI. We want to hear from you, regardless of the age you are now, or whatever age you were then, no matter where the incident took place. The bravery it takes to call us might empower others to speak out about the crimes committed against them. It is important to remember there was never, nor will there ever be an excuse for this type of behavior. In the eyes of the FBI, the victims will always come first.”

NYPD Commissioner James P. O’Neill said: “Today’s charges serve as a warning to individuals who continue to prey upon some of our society’s most vulnerable population: we are coming for you. I thank and commend the U.S. Attorney’s Office for the Southern District and the FBI for their tireless efforts to ensure child predators are taken off our streets. The NYPD will continue to work with our law enforcement partners to eradicate the trafficking of children in our city and nation and work to bring justice to victims of these heinous crimes.”

According to the Indictment unsealed today in Manhattan federal court:

From at least 2002 through at least 2005, Epstein enticed and recruited, and caused to be enticed and recruited, dozens of minor girls to visit his mansion in New York, New York (the “New York Residence”), and his estate in Palm Beach, Florida (the “Palm Beach Residence”), to engage in sex acts with him, after which he would give the victims hundreds of dollars in cash. In order to maintain and increase his supply of victims, Epstein also paid certain victims to recruit additional underage girls whom he could similarly abuse. In this way, Epstein created a vast network of underage victims for him to sexually exploit, often on a daily basis, in locations including New York and Palm Beach.

Epstein’s victims were as young as 14 at the time he abused them, and were, for various reasons, often particularly vulnerable to exploitation. Moreover, Epstein knew that many of his victims were under 18, including because, in some instances, victims expressly told him they were underage.

In creating and maintaining this network of minor victims in multiple states to abuse and exploit sexually, Epstein worked with others, including employees and associates who facilitated his conduct by, among other things, contacting victims and scheduling their sexual encounters with Epstein at the New York Residence and at the Palm Beach Residence.

In both New York and Florida, Epstein perpetuated this abuse in similar ways. Victims were initially recruited to provide “massages” to Epstein, which became increasingly sexual in nature and would typically include one or more sex acts. Epstein paid his victims hundreds of dollars in cash for each encounter.

In particular, during encounters at the New York Residence, victims would be taken to a room where they would perform a massage on Epstein, during which Epstein would frequently escalate the nature and scope of physical contact with his victims to include, among other things, sex acts such as groping and direct and indirect contact with the victims’ genitals. In connection with the encounters, Epstein, or one of his employees or associates, typically paid each victim hundreds of dollars in cash. Once minor victims were recruited, Epstein or his employees or associates would contact victims to schedule appointments for “massages.” As a result, many victims were abused by Epstein on multiple subsequent occasions.

To further enable him to abuse underage girls, Epstein asked and enticed certain of his victims to recruit additional minor girls to perform “massages” and similarly engage in sex acts with Epstein. When a victim would recruit another underage girl for EPSTEIN, he paid both the victim-recruiter and the new victim hundreds of dollars in cash. Through these victim-recruiters, Epstein maintained a steady supply of new victims to exploit, and gained access to dozens of additional underage girls to abuse.