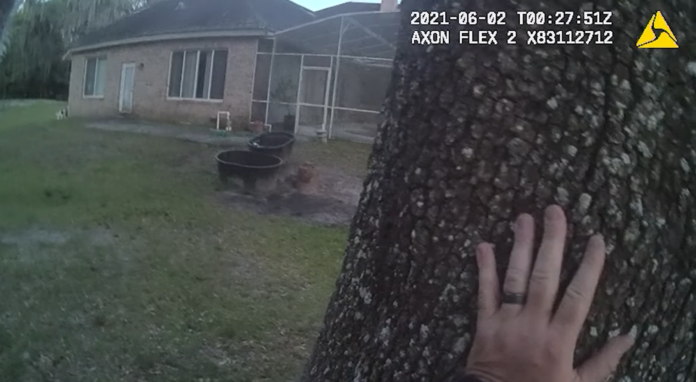 VOLUSIA COUNTY, Fla. – (VCSO / NEWS RELEASE) – A 12-year-old boy and a 14-year-old girl who ran away from a children’s group home Tuesday night in Enterprise broke into a house, armed themselves with several of the homeowner’s guns and opened fire on several responding deputies who tried to talk them into surrendering.

The 14-year-old girl was shot and wounded after she came out of the garage at 1050 Enterprise Osteen Road and pointed a shotgun at deputies outside the house. The 12-year-old boy, armed with an AK-47, finally put down his weapon shortly thereafter and was not injured.

Both children had fired at deputies multiple times throughout the incident as deputies attempted to resolve it peacefully. No deputies were injured.

The incident originated from a report of two runaways from Florida United Methodist Children’s Home (51 Children’s Way, Enterprise), where 12-year-old Travis O’Brien (DOB 10/15/2008) and 14-year-old Nicole Jackson (DOB 2/8/2007) were reported missing shortly before 5 p.m. Deputies learned that O’Brien is diabetic and didn’t have his medication with him. It was also reported that Jackson hit a FUMCH staff member with a stick.

Deputies were searching the area when, around 7:30 p.m., a passerby witness reported hearing glass break at 1050 Enterprise Osteen Road. As they approached the house, deputies saw two figures in the house. They contacted the homeowner, who told them no one should be home, and that there was a handgun, a shotgun and an AK-47 inside, along with a large amount of ammunition.

After deputies surrounded the home and began making announcements into the house, the children started shooting. The 14-year-old, Jackson, fired her first shot at a sheriff’s sergeant out a back patio door around 8:30 p.m. Preliminary information indicates the children fired at deputies on four separate occasions over the next 35 minutes before Jackson came out of the garage, pointed the shotgun at deputies twice, and was shot and wounded.

After Jackson was shot, deputies moved in to provide life-saving aid. O’Brien, who was in the garage armed with the AK-47, surrendered without firing another shot.

Jackson was transported to Central Florida Regional Hospital with life-threatening injuries. She was later reported to be out of surgery, in stable condition, and transferred to another hospital for further treatment. O’Brien was also transported to CFR for treatment of his medical condition, not because of any injuries sustained in the incident.

Sheriff Mike Chitwood told reporters at an 11:30 p.m. news conference outside the property’s gate that the sustained, armed assault on law enforcement from two children was “something I’ve never seen in 35 years in policing.”

“Deputies did everything they could tonight to de-escalate, and they almost lost their lives to a 12-year-old and a 14-year-old,” Sheriff Chitwood said. “If it wasn’t for their training and their supervision… Somebody would have ended up dead.”

“I don’t know where we get the men and women who respond to these incidents, who do what they do, and do it with bravery, do it with courage, and do it while trying to protect the sanctity of human life,” he said. “But they took rounds – multiple, multiple rounds – until they were left with no other choice but to return fire.”

The Sheriff’s Office handled close to 300 calls at the Florida United Methodist Children’s Home in 2020. Last month, a 14-year-old boy at the group home pleaded no contest to a charge of manslaughter in the death of a security officer he struck during an altercation in late March.

The juvenile defendants are each facing charges of attempted first-degree murder of a law enforcement officer and armed burglary. The Florida Department of Law Enforcement responded to the scene to conduct an investigation into the incident, as is standard in deputy-involved shooting cases. The deputies involved will be temporarily placed on paid administrative leave, also standard.