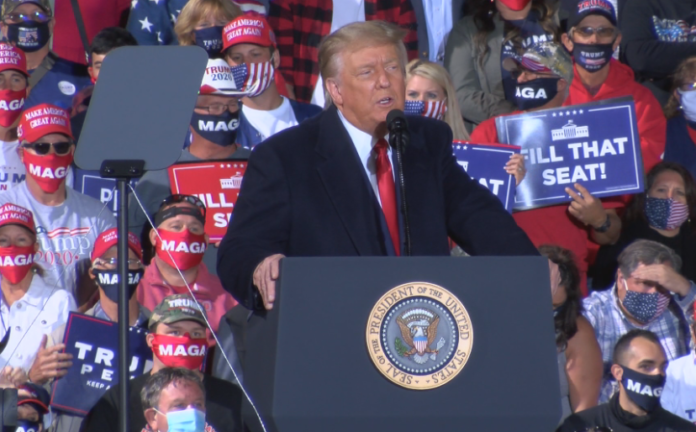 LAKE TOWNSHIP, Ohio – A duo was arrested on multiple charges Monday after they were allegedly found walking outside of an Ohio airport with shovels, a pitchfork, guns and more suspicious items near a rally held by President Donald Trump.

The suspects were encountered at the Toledo Executive Airport in Lake Township, the airstrip is a designated “reliever airport” for the Toledo Express Airport—close to where the political rally was being held.

The FBI, the Secret Service and Lake Township Police responded to investigate the incident.

The Sentinel-Tribune reported: An employee of GetGo Transportation, near Lemoyne and Ayers roads, called the police to report two people who had exited a vehicle and were walking on the tracks behind the airport. They had a backpack and shovels, the employee said.

[Lake Township Police Chief Mark] Hummer said police immediately “converged” on the couple, who were taken into custody without incident.

“They were not resisting, but not cooperating,” he said.

In their possession, Hummer said, were two shovels and a pitchfork. The backpack had a Glock pistol with extended magazine, 200 rounds of ammunition and four tourniquets, he said.

Their rented Toyota Camry “had several items suspicious in nature,” Hummer said. He described them as “odd items, but nothing illegal.”

The decision was then made to lock down the school campus, which is just east of the airport.

“We don’t take it lightly. We do it for a reason,” Hummer said of the lockdown. “If nothing else, we’re going to err on the side of caution when our kids are involved.”

Police did not say if they believed the suspects meant harm to The President or his supporters. The investigation is ongoing.