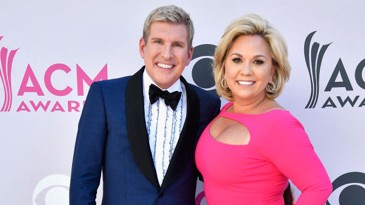 “Todd and Julie Chrisley are charged not only with defrauding a number of banks by fraudulently obtaining millions of dollars in loans, but also with allegedly cheating taxpayers by actively evading paying federal taxes on the money they earned,” said U.S. Attorney Byung J. “BJay” Pak. “Celebrities face the same justice that everyone does. These are serious federal charges and they will have their day in court.”

“The reality of this indictment is that the FBI takes allegations of bank fraud and wire fraud very seriously and devotes many resources to protecting the institutions and citizens affected by those crimes,” said Chris Hacker, Special Agent in Charge of FBI Atlanta. “The Chrisleys’ will now have their day in court, but anyone else considering this type of alleged activity should take notice.”

“The tax charges in this indictment serves notice that the Internal Revenue Service has zero tolerance for individuals who attempt to shirk their tax responsibilities. This action is also part of a much larger and coordinated effort by the IRS and Department of Justice to aggressively find and crack down on individuals who try to conspire with others to hide their income and then lie to federal agents when confronted. Honest and law abiding taxpayers are fed up with the likes of those who use deceit and fraud to line their pockets at their expense,” said Thomas J. Holloman, III, Special Agent in Charge of the Atlanta Field Office.

According to U.S. Attorney Pak, the charges, and other information presented in court: from at least as early as 2007 through approximately 2012, Todd and Julie Chrisley allegedly conspired to defraud numerous banks by providing the banks with false information such as personal financial statements containing false information, and fabricated bank statements when applying for and receiving millions of dollars in loans.

After fraudulently obtaining these loans, the Chrisleys allegedly used much of the proceeds for their own personal benefit. In 2014, two years after the alleged bank fraud scheme ended, Todd and Julie Chrisley allegedly used fabricated bank statements and a fabricated credit report that had been physically cut and taped or glued together when applying for and obtaining a lease for a home in California.

Todd Chrisley, 51, and Julie Chrisley, 46, both of Nashville, Tennessee are also charged with conspiring with their Roswell, Georgia-based accountant, Peter Tarantino, 56, of Milton, Georgia to defraud the Internal Revenue Service.

In February 2017, Todd Chrisley publicly claimed on a national radio program “obviously the federal government likes my tax returns because I pay 750,000 to 1 million dollars just about every year so the federal government doesn’t have a problem with my taxes.” However, Todd and Julie Chrisley allegedly did not timely file income tax returns for the 2013, 2014, 2015, and 2016 tax years or timely pay federal income taxes for any of those years.

Instead, the Chrisleys and Tarantino allegedly took steps to obstruct IRS collection efforts, which included hiding income, lying to third parties about their tax returns, and – in Tarantino’s case – lying to FBI and IRS-CI Special Agents.