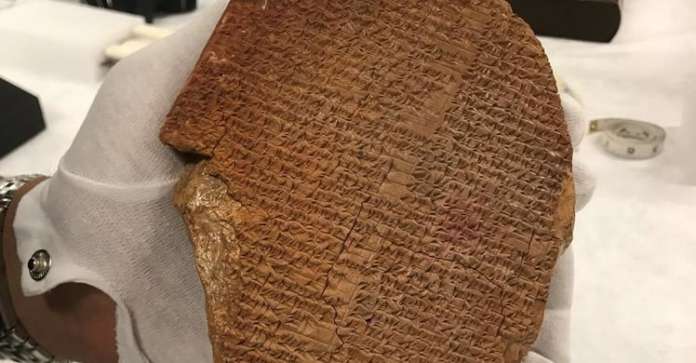 NEW YORK—Pursuant to ongoing Cultural Property, Arts & Antiquities investigations by ICE’s Homeland Security Investigations (HSI) New York, a civil complaint was filed Monday to forfeit a rare cuneiform tablet bearing a portion of the epic of Gilgamesh, a Sumerian epic poem considered one the world’s oldest works of literature. Known as the Gilgamesh Dream Tablet, it originated in the area of modern-day Iraq and entered the United States contrary to federal law. The tablet was later sold by an international auction house (the “Auction House”) to Hobby Lobby Stores, Inc. (“Hobby Lobby”), a prominent arts-and-crafts retailer based in Oklahoma City, Oklahoma for display at the Museum of the Bible (the “Museum”). Despite inquiries from the Museum and Hobby Lobby, the Auction House withheld information about the tablet’s provenance. The tablet was seized from the Museum by law enforcement agents in September 2019.“We are proud of our investigation that led to this reclaiming of a piece of Iraq’s cultural history. This rare tablet was pillaged from Iraq and years later sold at a major auction house, with a questionable and unsupported provenance,” stated Peter C. Fitzhugh, special agent in charge for HSI New York. “HSI New York’s Cultural Property, Arts and Antiquity Investigations program will continue to work with prosecutors to combat the looting of antiquities and ensure those who would attempt to profit from this crime are held accountable.”

“Whenever looted cultural property is found in this country, the United States government will do all it can to preserve heritage by returning such artifacts where they belong,” stated Richard P. Donoghue, United States Attorney for the Eastern District of New York. “In this case, a major auction house failed to meet its obligations by minimizing its concerns that the provenance of an important Iraqi artifact was fabricated, and withheld from the buyer information that undermined the provenance’s reliability.”

HSI’s investigation revealed that in 2003, a U.S. antiquities dealer (the “Antiquities Dealer”) purchased an encrusted cuneiform tablet from a Middle Eastern antiquities dealer in London. After the tablet was imported and cleaned, experts in cuneiform recognized it as a portion of the Gilgamesh epic in which the protagonist describes his dreams to his mother (hence, the “Gilgamesh Dream Tablet”). The protagonist’s mother interprets the dreams as foretelling the arrival of a new friend. She tells her son, “You will see him and your heart will laugh.”

The Museum cooperated with the government’s investigation. This case is being handled by EDNY’s Civil Division, with assistance from the District of Columbia and the Justice Department’s Money Laundering and Asset Forfeiture Section (MLARS).

HSI’s International Operations, through its 80 offices in 53 countries, works closely with foreign governments to conduct joint investigations, and is committed to pursuing a strategy to combat transnational organized crime related to the illicit trafficking of cultural artifacts by targeting high-priority organizations and strengthening international law enforcement partnerships.

HSI has recovered and returned approximately 12,500 artifacts to more than 30 countries since 2007, including paintings from France, Germany, Poland and Austria; cultural artifacts from China and Cambodia; dinosaur fossils from Mongolia; and illuminated manuscript left from Italy; a pair of royal Korean seals, ancient Peruvian ceramics, an ancient gold coffin repatriated to Egypt, and most recently, more than 500-year-old copy of Christopher Columbus’ letter describing his discoveries in the Americas to the Government of Italy.