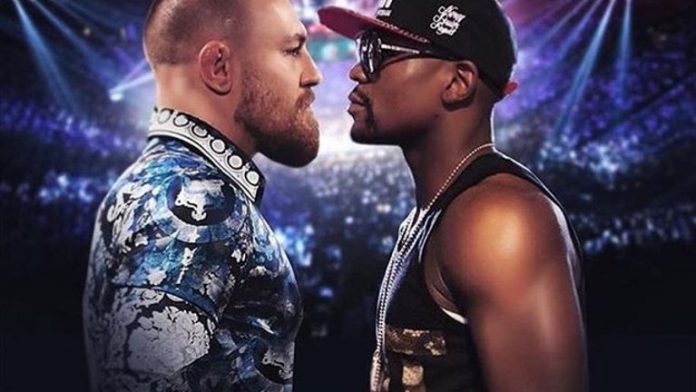 Over months of verbal sparring between Conor McGregor and Floyd Mayweather, it became increasingly apparent that a mega-fight between the two wasn’t a mere vehicle for trash talk, but an event that might actually take place. Monday brought news that the two combat-sports superstars have, in fact, agreed to terms on a meeting in the ring.

The Irish Sun cited a source close to McGregor who told the newspaper that the UFC lightweight champion and Mayweather “have both settled on their respective fees.” The source added, “The contract hasn’t officially been signed yet because of a third-party holdup, but all the details have all been agreed on.

“The fight could even be announced within two weeks.”

That “third-party holdup” could be UFC President Dana White, whose company has McGregor under contract and who has repeatedly thrown cold water on the proposed fight. In January, White said that the chances of the showdown taking place were about the same as him “being the backup quarterback for [Tom] Brady” in the Super Bowl.

White did offer Mayweather $25 million to fight McGregor, but that was mostly to call the retired boxer’s bluff, after Mayweather had said on ESPN that he’d give McGregor $15 million to fight him. Mayweather, who insisted that his September 2015 win over Andre Berto, which ran his record to 49-0, would be the last fight of his career, has stated that he won’t enter the ring again for less than $100 million.

Mayweather has also indicated that he’s aware McGregor is one of the few possible opponents who could generate enough interest to help him reach that massive figure. “Only thing that I’m probably interested in is the Conor McGregor fight,” Mayweather told ESPN’s “First Take” in January. “I’m a businessman, and it makes the most business sense, I think.”

The Irishman has broken UFC records for pay-per-view revenue, but he also sees Mayweather as a means to the biggest payday of his life. In November, McGregor said, “Tell Floyd and Showtime, I’m coming. . . . I want $100 million cash to fight him under boxing rules because he’s afraid of a real fight.”

More recently, Mayweather said, “I believe the fight could happen. … Let’s give the fans what they want to see.” Around the same time, McGregor said that the fight “is being more than explored. That fight has been in the works for a while now.”

McGregor made those comments during a pay-per-view interview session in England, at which he also said that, if the UFC tried to stand in the way of a boxing match with Mayweather, he could use the “Ali Act” to maneuver around his contract with the MMA company. That piece of legislation, officially called the Muhammad Ali Boxing Reform Act, has a “Protection from coercive contracts” clause that McGregor could potentially cite in a courtroom battle with the UFC, and it may explain why he chose to get a boxing license from the state of California (Bloody Elbow has a detailed explanation here).

To further tease the promise of a fight, McGregor posted footage of himself in a training session last week for a boxing match. “Why conquer one world when you can conquer two?” he’d said during his PPV interview.

McGregor has never fought in a sanctioned boxing-only match before, and Mayweather, who is arguably the greatest defensive boxer ever, would figure to the betting favorite if the fight were to take place. However, Mark Henry, who coaches the man McGregor defeated for the UFC’s lightweight crown, Eddie Alvarez, recently said the MMA icon “has a chance of knocking out Mayweather if it was in the first three to four rounds.”

After scoring a quick knockout win at UFC Fight Night 104 earlier this month, Chan Sung Jung (a.k.a. “The Korean Zombie”) said, “I’m a fan of Conor, as a fighter. I think he’s done great things for himself. Under boxing rules, though, I don’t see any way that Conor could beat Mayweather. If I were to bet on that fight, I’d put every last cent I have on Mayweather.”

Of course, the Irish Sun may have jumped the gun a bit (or a lot), and until we hear directly from McGregor and/or Mayweather, their proposed fight will continue to be just talk. The newspaper reported that McGregor pulled out of a scheduled meet-and-greet in Dublin later this week, ostensibly to shoot an anti-bullying video in Las Vegas as part of his settlement with the Nevada State Athletic Commission, following a pre-fight melee with Nate Diaz before UFC 202 in August. The Irish Sun claimed that McGregor “will also use the opportunity to finalize details with his representatives in Las Vegas as the Mayweather fight inches closer.”