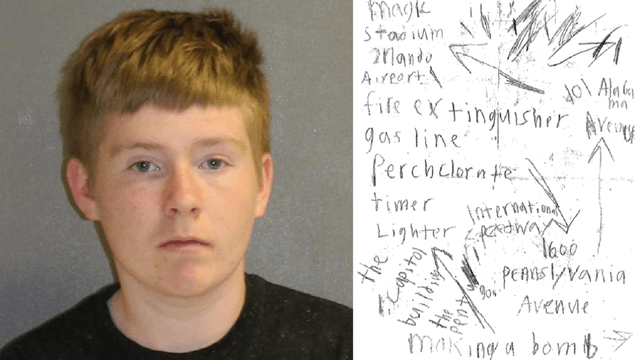 FLORIDA — An inmate at the Volusia County Branch Jail has been charged with making threats to bomb several government buildings and other major facilities.

Ethan Russell, 18, was arrested on a felony charge of making written threats to kill after he handed a jail officers a note explaining his plans to join ISIS and bomb seven locations. His targets were the White House, the Capitol building, the Pentagon, Orlando International Airport, the Amway Center, Daytona International Speedway and the Volusia County Courthouse in DeLand.

Russell was in custody awaiting trial on previous felony charges including attempted armed burglary. Those charges stem from an incident in Deltona on March 25, when a neighbor witnessed him trying to break into a house by throwing a rock through a window. Deputies caught Russell carrying seven large kitchen knives, a green mask and a pair of gloves.

On July 9, jail officers contacted the Sheriff’s Office to report Russell had provided a 5-page handwritten note detailing his plan to join ISIS, the Taliban and al-Qaeda and start bombing his targets.

Russell remains in custody without bond at the Branch Jail.