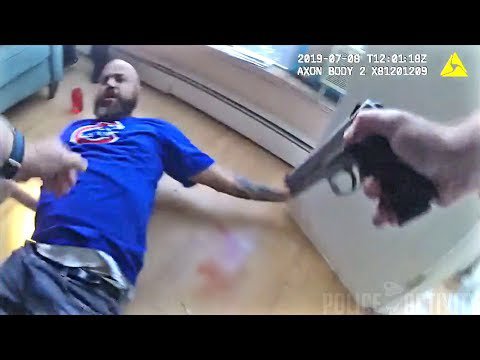 The Civilian Office of Police Accountability released video Friday of a Chicago police officer fatally shooting a suspected kidnapper on the Northwest Side. The body camera video shows an officer confronting a man July 8 in an apartment in the Belmont Central neighborhood. After partially entering the room, the police officer yells, “Don’t move. Chicago police. Don’t move,” the video shows. The suspect, reclined on the sofa, leans forward, yells something inaudible and begins to turn over, the video shows. As the suspect places his hand near an apparent handgun on the edge of the sofa, the officer lets off several shots, and the suspect falls to the ground. He died later at Illinois Masonic Medical Center, police said. Ephraim Eaddy, a COPA spokesman, said the investigation into the officer’s actions is ongoing. The suspected kidnapper, 42-year-old Luis E. Vasquez, had allegedly carjacked two people the night before in the west suburbs, police have said. He drove the man and woman — both in their 40s — to the 6200 block of West Grand Avenue and held them against their will inside an apartment, police said.