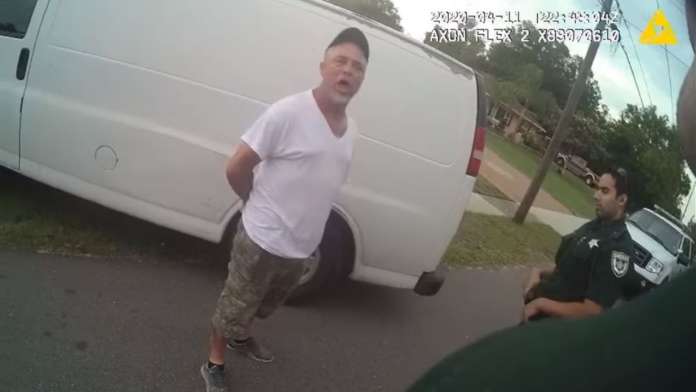 FLORIDA — A DeLand man charged with threatening his mother with a butter knife and snatching the phone from her when she tried to call for help was arrested on additional charges of threatening and assaulting a law enforcement officer after he intentionally coughed, blew and spit at the arresting deputy and promised to bash his head with a hammer.

Brent Smith, 46, came home intoxicated Saturday evening to the residence he shares with his mother on Leon Avenue in DeLand. An argument followed, and Smith shoved his mother several times before grabbing a butter knife and screaming at her, calling her obscene names and saying “I will kill you!” When she called for help, Smith grabbed her cell phone from her hand, and he was still holding it when deputies arrived on scene.

As Smith was placed into custody, he started arguing with deputies, coughing at them and making threats including “bashing your f***ing brains in.” Later from the back seat of a patrol car, Smith stated to the deputy: “I hope you die. I hope you catch corona. I hope the coronavirus, I hope it latches on to you…” and then started coughing and blowing at the deputy. Some body camera footage of Smith’s behavior is available here.

Smith was charged with aggravated assault with a deadly weapon, aggravated battery on a person 65 or older, tampering with a witness, robbery by sudden snatching, grand theft, assault on a law enforcement officer, corruption by threat against a public official and violation of probation on an original charge of aggravated battery on a pregnant person. He was transported to the Volusia County Branch Jail with no bond.