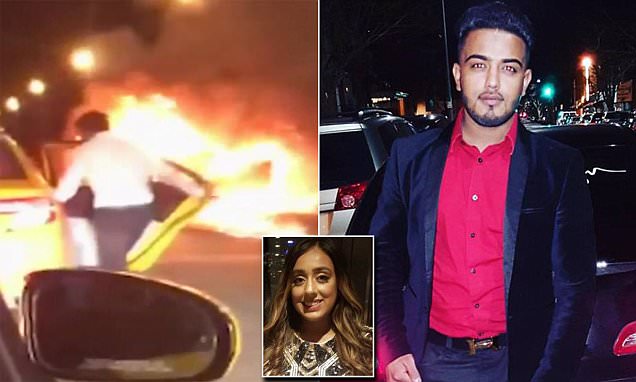 A 24-year-old Brooklyn man has been sentenced to up to 12 years in state prison after he pleaded guilty to second-degree manslaughter for causing a car crash on the Gowanus Expressway and fleeing the scene with his passenger stranded inside the burning car, leaving her to die.

District Attorney Eric Gonzalez said, “This defendant’s senseless and reckless actions caused the death of a young woman who had her entire life ahead of her. He showed complete disregard for human life and for the safety of everyone using our roadways. Hopefully, the victim’s heartbroken family will find some solace with today’s sentencing.”

The District Attorney identified the defendant as Saeed Ahmad, 24, of Marine Park, Brooklyn. He was sentenced today by Brooklyn Supreme Court Justice Vincent Del Giudice to an indeterminate term of four to 12 years in prison.

The District Attorney said that, according to the investigation, on October 13, 2017 at approximately 4 a.m., Ahmad was driving an Infinity sedan, returning from a night out in Manhattan with a friend, 25-year-old Harleen Grewal.

Ahmad was driving at an excessive rate of speed, attempted to pass other vehicles and crashed his car into a side barrier between the Hamilton Avenue and the Prospect Expressway exits, causing it to explode and burst into flames, the evidence showed. He got out of the burning car, got into a cab and left without calling 911 or alerting anyone that the victim was still in the vehicle. She subsequently died and her remains were recovered from the scene after the fire was put out.

Ahmad was arrested later that morning and tests determined that his blood alcohol level at the time of the crash was above the legal limit of .08.