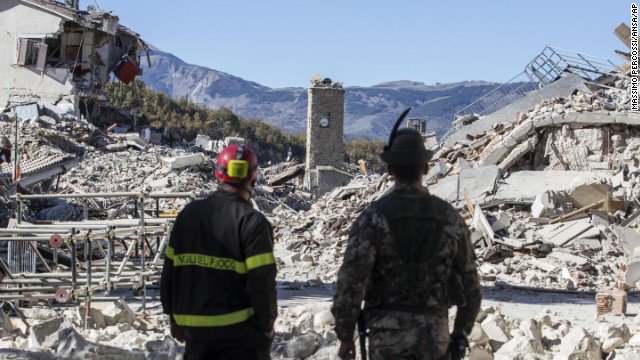 ROME – A strong earthquake that shook Italy Sunday morning took a heavy toll on historic churches and other landmark buildings, some dating back to the Middle Ages.

No deaths were reported, and only “tens” of injuries, but the physical damage was extensive.

In Preci, the walls of a hillside cemetery came crashing down on top of the Abbey of Saint Euticius, founded in the 5th century by a group of Syrian monks and hermits and now crushed under the weight of its own burial ground.

The old town of Arquata del Tronto, in the central region of Le Marches, was virtually destroyed, along with its 13th century church dedicated to Saint Francis. Only the castle remains, still standing guard over the ruins below.

In Norcia, a city that considers itself the birthplace of pork sausages, three of the most important churches were heavily damaged.

According to a preliminary list compiled by the Carabinieri Art Squad, the 14th century basilica of Saint Benedict of Nursia, , which had already been damaged by earlier recent quakes, has almost entirely collapsed, and only its facade still stands; the same fate befell the 16th century Cathedral of Saint Mary Argentea and a former gothic church-turned-concert hall. A 15th century church, San Salvatore in Campi, had been shattered in an earthquake on Wednesday.

Sunday’s quake was the strongest of a recent flurry of earthquakes. It registered 6.5 on the Richter scale, according to Italy’s National Institute of Geophysics and Volcanology, and was felt the entire length of the Italian boot. It struck at 7:40 a.m., local time. The strongest hit areas were Le Marche and Umbria.

Even in Rome, more than 110 miles to the east, the papal Basilica of St. Paul’s Outside the Walls was damaged: it shows some cracks on its facade, some cornices have crumbled, and a candelabra is at risk of dropping down from the ceiling.

Prime Minister Matteo Renzi vowed that Italy would rebuild the homes, churches and other damaged structures, and that financial resources would be found to restore essential elements of the national identity and cultural heritage. “We will rebuild everything,” he said Sunday, “the houses, the churches, the shops. We are dealing with marvelous territories, territories of beauty.”

The number of human casualties could potentially have been much greater, but residents of many of the historic town centers had been moved out when the tremors began last week.

In Camerino, a hilltop town, city spokesman Emmanuele Pironi said most of the area’s 9,000 university students had left after the historic center was closed several days ago, and some of the 7,000 residents had been moved to hotels near the coast or to shelters nearby, the Associated Press reported. Few remained in their homes.

The mayor of Ussita said a huge cloud of smoke erupted from the crumbled buildings of his town Sunday morning.

“It’s a disaster, a disaster!” Mayor Marco Rinaldi told ANSA. “I was sleeping in the car and I saw hell.”

According to Luca Ceriscioli, governor of Le Marches, the current number of displaced people in his region is 10,000, but iftremors continue, he warned, it might reach 100,000.

In Norcia, closest to the epicenter, friars and devotees gathered together in the piazza to kneel and pray after the earthquake, as shown by pictures taken by the Italian daily, La Repubblica.

“There is something here almost more important than the value of the single paintings, that was lost today,” said Philippe Daverio, an Italian art critic and author. “What’s equally important here is that Benedict, the patron saint of Europe, and his sister Scholastica, were born in Norcia. These two twins changed the framework of the West by inventing monastic group life and the ‘rule.'” Daverio was referring to the Latin phrase “ora et labora,” which means “pray and work.”

“From them,” he said, “an ethos was born that enriched the whole West, because they would work more than they would consume.”

Rebuilding the churches and other landmarks will be painstaking, but not impossible.

“In Italy we do not throw away the rubble,” said Fabio Carapezza-Guttuso, the Ministry of Culture’s national crisis management unit officer. “Even single stones are numbered and handpicked so that they can later be used in the reconstruction, along with pieces of wood, iron and beams. It’s a big effort, and that is why we employ archaeologists to sift through the ruins.”

Carapezza-Guttuso mentioned, as an example, the work done to restore the rose window of the church of Saint Augustine in Amatrice, which was badly damaged in a deadly earthquake in August. That window is now ready – but what remained of the church collapsed Sunday.