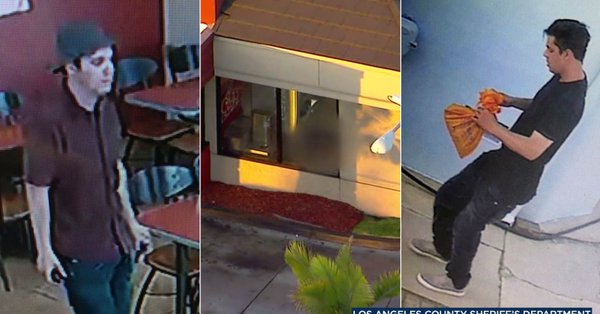 **UPDATE: Man believed to be the person who shot off-duty deputy at Calif. fast food restaurant has been arrested – NBCLA**

ALHAMBRA, Calif. — Los Angeles County Sheriff’s Homicide investigators responded to the 2500 block of W. Valley Blvd, Alhambra, to assist Alhambra Police Department with the investigation of the circumstances surrounding the shooting of an off-duty deputy, which occurred on Monday, June 10, 2019, at approximately 5:45 P.M.

The suspect is described as a male white adult, 20-30 years old, 5’09-5’11, wearing a burgundy short-sleeved button down shirt, slim blue jeans, a light fedora hat, and sunglasses, and was armed with a handgun.

The suspect vehicle is described as a white 4-door, 2010-2014 Kia Sorento SUV with paper plates.

Investigators believe the suspect changed his clothing shortly after the incident, and is now wearing a black t-shirt and black jeans. The suspect left the area in the same vehicle as described above.

Anyone with information about this incident is encouraged to contact the Los Angeles County Sheriff’s Department’s Homicide Bureau at (323) 890-5500. If you wish to remain anonymous, call “LA Crime Stoppers” by dialing 800-222-TIPS (8477), using your smartphone by downloading the “P3 MOBILE APP”