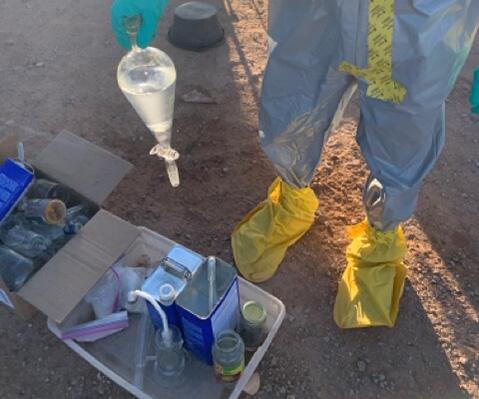 SELLS, Ariz. – A Tohono O’odham Nation member and active firefighter was one of two people arrested Monday for operating a methamphetamine lab at a mobile-home located in the remote area of the Village of Santa Rosa following a probe by Homeland Security Investigations (HSI) and federal officers with the Native American Targeted Investigations of Violent Enterprises (NATIVE) Taskforce.

Stephen Folson, 36, and Desiree Saraficio, 29, admitted to conspiring to possess and manufacture methamphetamine after federal agents searched their home.

“Meth labs are basically ticking time bombs, waiting for a single spark to ignite and explode causing irreparable damage and, in the most extreme cases, death,” said Special Agent in Charge Scott Brown. “Not only is this an environmental hazard, but one that should have never been operated by someone in a position of public trust. The defendants most certainly knew better. The discovery of the meth lab is yet another example of the importance of partnering with federal agencies to leverage all capabilities to disrupt illicit activities along the southwest border.”

According to the complaint, agents on Monday encountered Folson and his two teenage sons at his residence. There they identified a meth lab in use and discovered a substantial amount of methamphetamine manufacturing equipment and precursor products to include glassware, extra strength allergy medicine, ventilation systems, filtration systems, soda bottles, Acetone containers, various torches, charcoal lighter fluid, glass pipes and other items. Due to the high toxicity levels, the DEA hazardous materials team responded and discovered additional unknown chemicals inside various pieces of glassware. The entire residence was decontaminated to prevent further exposure to officers and the neighborhood.

Upon his arrest, Folson admitted he has been a methamphetamine user for approximately 9-10 years and has been cooking the narcotic for about 3 years. He further detailed how he sources his ingredients from China and Canada by ordering them online and paying for them with his debit card. He also purchases from eBay Canada to circumvent the state/federal regulations.

Folson confessed that he knows the process of cooking meth is dangerous and toxic but needs it to function. He also advised he smoked more and more meth, to where now he must “smoke at least once an hour to stay awake.”