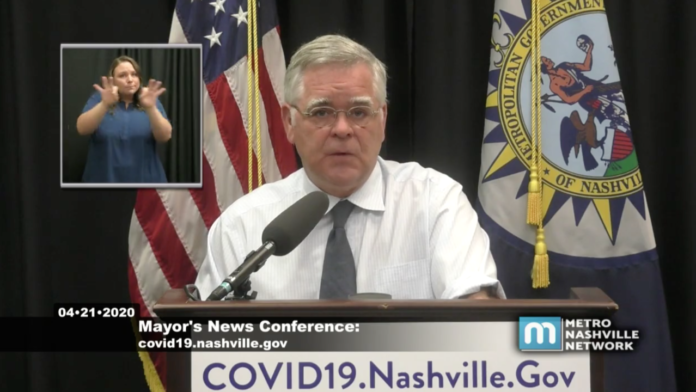 The Democratic Mayor wants to hike the city’s property tax by 32% to recover.

Metro Finance estimates that the city will experience a $470 million revenue decline over a 16-month time frame due to the impact of COVID-19 and the March tornado. The decline in revenue during Q4 of fiscal year 2020 required Metro to cut expenditures and spend down remaining fund balances, leaving Metro with only $12 million of fund balances at the end of FY20.

In the five years prior to the current historically low rate that began in FY2018, the combined rate averaged $4.545.

The proposed FY21 operating budget totals $2,447,489,500. Management actions produced over $234 million in savings, reductions, or spending deferrals. The property tax increase will restore $100 million in fund balances, make up for $216 million in net revenue losses, and fund $16 million in net operating needs for a “continuation of effort” budget. In addition to other new revenue generated by Mayor Cooper’s office and with the help of departmental savings, Metro services will continue without interruption. Metro employees will forgo pay raises or cost of living adjustments, but this budget avoids the layoffs and pay cuts set to occur in hundreds of other cities nationwide.

“This is an unprecedented and difficult time for all Nashvillians,” said Mayor Cooper. “Thousands of residents have lost their jobs during the pandemic, and that makes the necessary decision to raise taxes all the more difficult. And as I mentioned during the State of Metro address, the city has thinned its cash reserves to a point where we find ourselves without a rainy-day fund during a stormy season. This is a crisis budget – not a discretionary budget – that will ensure Metro and Metro Nashville Public Schools can continue to meet our community’s needs.”

“Nashville is stronger than our current challenges,” added Mayor Cooper. “This is the operating budget that will get us through this crisis and prepare for a return to prosperity.”

“While this budget does not include the many new investments I had hoped to make in a full deployment of body cameras, affordable housing, transportation, social and emotional learning, and much more, this budget will provide needed financial stability to Metro Government,” said Mayor Cooper. “Nashville’s growth will return once again, our economy will flourish as it did before the storm, and we will not lose sight of the good work we’ve set out to do on behalf of all Nashvillians.”