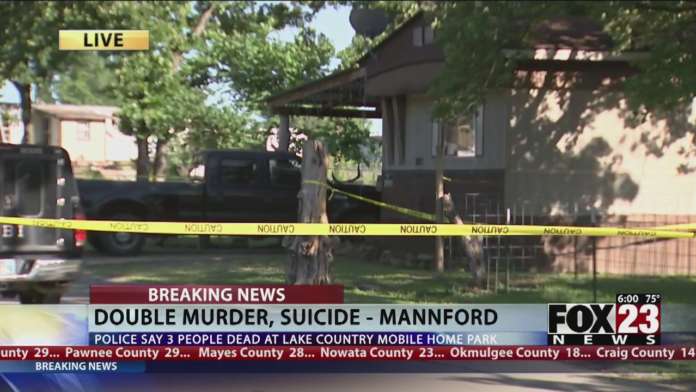 MANNFORD, Okla. – The Oklahoma State Bureau of Investigation (OSBI) is investigating a double homicide that occurred Monday morning in Mannford.

Mary Milam, 57, and Donald Langdon,59, lived together in the 1100 block of Osage Place in Mannford.

When Mannford police officers arrived, they found the couple dead on their property.

Their neighbor, 83-year-old James Hancock, walked out of his mobile home and admitted to officers that he shot them. Hancock sat in a chair and pointed a gun at his head.

Hancock, at one point, placed the gun in his lap but then returned it to his head. Officers attempted to get him to put down the weapon but after 30 minutes, Hancock shot himself.

He was transported to the hospital in Tulsa where he died of a self-inflicted gunshot wound.

Investigators say they do not know what prompted the confrontation that led to the shooting. The last homicide in Mannford took place in 2012, and before that in 1996.