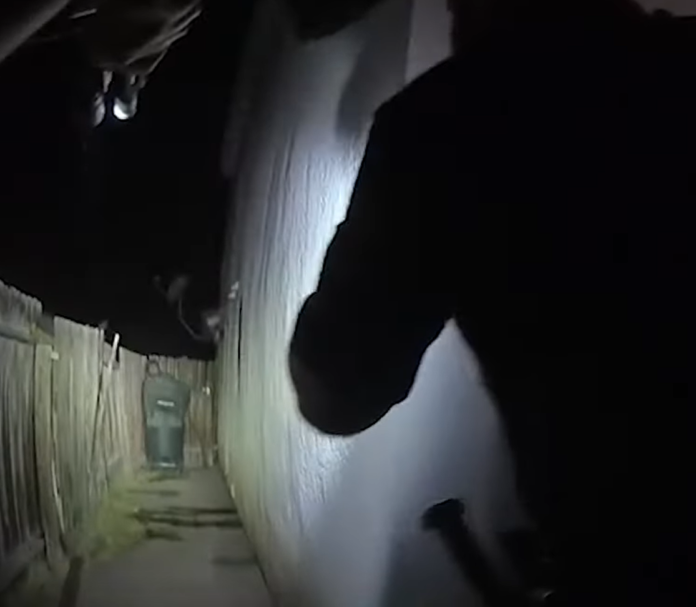 Neither officer in the pursuing patrol vehicle activated their body camera devices during the pursuit which took less than a minute. Based upon the preliminary investigation, including the location of cartridge casings and bullet impacts, the suspect immediately exited his vehicle and fired multiple times at the officers who were exiting their vehicle. The officers returned fire. Due to the immediacy of the suspect vehicle becoming disabled, short duration of the vehicle pursuit and the suspect immediately firing at officers, they did not activate their body cameras until the first exchange of gunfire had already occurred. Officers confirmed that the suspect had fled the site of the initial exchange of gunfire. Officers and the dispatch center began to receive information from citizens that the suspect had fled over the concrete wall and was moving in the backyards of residences in the 5700 block of Autumn Crest Drive.

Officers learned from a witness that the suspect had discarded a handgun; however, officers had received information earlier that the suspect was in possession of an additional firearm. Officers formed a search team to look for the suspect. This took approximately 15-minutes. At approximately 3:15 AM, officers believed they located the suspect concealed in a trash can in the backyard of a residence. Three officers discharged their firearms during the second shooting. Officers rendered medical aid to the suspect who succumbed to his injuries and was pronounced deceased by medical personnel.

No weapon was found in the suspect’s possession. The suspect’s firearm was recovered in a nearby backyard in his path of flight and found to have been fired dry. Additional firearms linked to the suspect were located discarded on Blossom Valley Lane and Brazil Avenue. The suspect was identified as 21-year-old Che Noe Zuniga Jr. of Bakersfield.