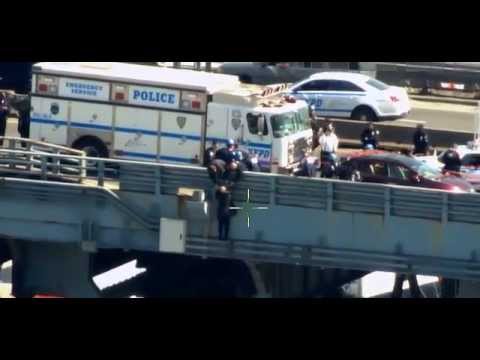 SCROLL DOWN FOR VIDEO — NYPD Detective Meghan Kinsella of the 108 Precinct had just completed conducting a home visit when she heard a 911 call of a suicidal female on the Kosciuszko Bridge come over the police radio. The 14-year veteran immediately decided to respond and assist. When she pulled up, just behind an Emergency Service Truck, she rushed over to where the woman was located, on the outside of the bridge railing and standing on top of the side piping.

Kinsella, who has worked as domestic violence officer for more than 9 years, found herself standing next to NYPD Detective Steven Stefanakos of Emergency Service Unit Truck 10. Together they began utilizing crisis communication skills and started talking the despondent woman.

At first the woman, 45, of Brooklyn was not responsive to either Kinsella or Stefanakos however the Detectives did not give up.  They took turns engaging her in conversation, letting her know they were there to help. Although the woman was not responding, they knew she could hear each of them.

Stefanakos, a 24 year veteran who has spent 20 of those years with the Emergency Service Unit, said he did whatever he could do to try to connect with the woman on an emotional level and try to build rapport.  When he first started to speak with her she let go of a wire she was holding onto and bent her knees. He was afraid she was going to jump.

“I told her ‘I don’t know what is going on and what is happening with you but give us a chance to talk to you,’” he said. When he mentioned the possibility of her having a family or children, she grabbed back onto the wire. At that moment Stefanakos, who has children of his own, knew he had made a critical connection with her.  He then continued talking with her.

Stefanakos is an instructor with the NYPD’s Emergency Service Unit and he teaches officers how to interact with emotionally disturbed persons in crisis. He used his training to gain the woman’s trust and to let her know they were there for her. Having Kinsella at his side helped to get that message across.

“It was nice to have a female voice there to reach out to her,” said Stefanakos.

Kinsella assured the woman that she was strong enough to get through the situation.

Together, the two detectives were finally able to convince the woman to come off the ledge. They reached over, grabbed her and pulled her to safety. EMS transported the woman to Elmhurst Hospital for treatment.

Stefanakos was happy they were able to save her. “It’s a huge relief. It actually is euphoric because you made a difference in somebody’s life, right there and then,” he said.

Kinsella displayed the empathy that helped resolve the situation peacefully by adding, “I’m a mom so I just wanted to get her home safe with her family.”