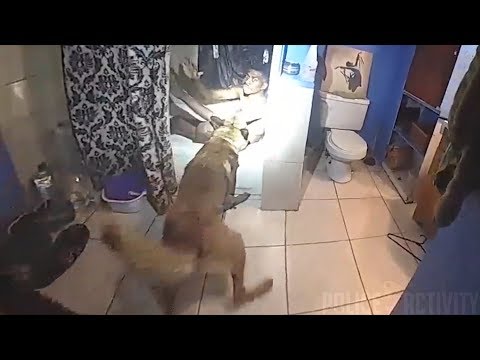 TULSA — (Scroll down for Video) — Tulsa Police released bodycam video of a K-9 team arresting a man after a standoff in July. Tyvon Eugene Mumphrey was wanted on suspicion of forcing two people from a van at gunpoint and throwing a 2-year-old child from the vehicle onto the ground. Officers surrounded a home in the 1800 block of North Madison July 11. After a brief standoff, they made entry to the home. On the video Kahn, a Tulsa Police K9 officer can be heard panting. K9 Training Officer, Sgt. Ryan Woods said, He was breathing in and out of his mouth which means he wasn’t using his sense of smell.” A little further into the video the backup officer sees Mumphrey in the bathroom. But, Kahn’s panting may have kept the dog from alerting that the suspect was hiding behind the shower curtain, not once, but twice.

Several seconds go by before the K-9 handler brings the dog back to the bathroom. Again, Kahn fails to alert. The handler even appears to guide the dog back towards the bathtub, where Kahn then finds and bites the suspect’s arm to hold him as the officers make the arrest. Tulsa police often use dogs in searches and arrests to avoid deadly force situations. Woods says what you see in these videos changed two things for the TPD K9 unit. Kahn is getting training to find suspects behind a shower curtain. Additionally, the K9 unit may not always use dogs when it is too hot outside. Mumphrey was taken to the hospital to be treated for the bite. He is charged with child abuse, robbery with a dangerous weapon and possession of a firearm by a convicted felon.