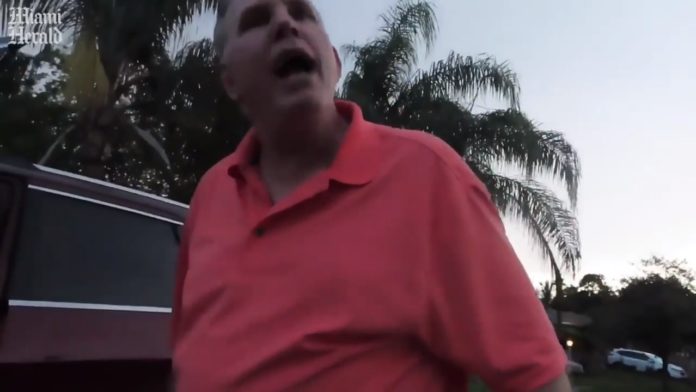 MIAMI — 58-year-old Joseph Max Fucheck has been charged with, Aggravated Assault with a Firearm with Prejudice and Possession of a Firearm by Convicted Felon, both felonies, for events that transpired on June 14, 2020 at the victim’s home in unincorporated Miami-Dade County.

“It is sad that racism can turn the most mundane act into a confrontation with potentially violent overtones,” said State Attorney Katherine Fernandez Rundle. “All Mr. Wynn wanted to do was go into his mailbox for his mail. Suddenly, as the video shows, Mr. Fucheck accosted him with a barrage of ugly statements and racial slurs. This incident was about much, much more than the obnoxious behavior of an irate man arming himself and screaming at someone he did not know and had no reason to fear. With this arrest, we are alleging today that the incident was about hate and intimidation, pure and simple. I wish to commend the work of the Miami-Dade Police Department’s Northside District Detectives and agents of the Florida Department of Law Enforcement for their efforts intended to bring this case to a proper resolution.”

The victim in this case, Dwayne Wynn, was across the street from his house speaking with a neighbor when he observed an unknown individual park a red Jeep Cherokee at his home, exit the vehicle, and place something in Mr. Wynn’s mailbox. This individual, later identified as Joseph Max Fucheck, returned to the Jeep and drove off. Upon checking his mailbox, Wynn found a 3 x 5 card containing Fucheck’s name and the statements, “We Buy Houses…CASH!” and “We Buy Houses… FAST!”. Wynn then returned to his neighbor’s property to complete his conversation.

When he heard a car approaching, Wynn looked up and saw Fucheck’s Jeep coming down the street towards him. Fucheck allegedly parked the car between Mr. Wynn and his home, jumped out of his vehicle, and began a profanity-laced rant, stating, “That’s not your property mother…r! I saw you! I was down the street watching you! I saw you take that out of there. You’re just a mother…ing nosey neighbor! Give me my card, that’s my property!” Fucheck lunged at Wynn twice, eventually bumping into him. At this point, Fucheck allegedly pulled out a firearm and pointed it at Wynn yelling, “Mother…r you’re going to give me that mother…ing card, that’s my property!” Witnesses and children watched these events and allegedly tried to divert Fucheck’s attention away from Wynn.

Fucheck then allegedly lowered the gun and Wynn began recording the remainder of the interaction with his camera. In the 2 minute and 17 second video, Fucheck, a convicted felon, can be seen carrying and menacingly brandishing a firearm in the direction of Wynn. Fucheck made repeated overtures regarding the firearm, stating, “Damn right I carry a mother…ing gun.” Fucheck repeatedly took issue with Wynn’s claim that he was on his personal property, disputing whether Wynn actually owned the property. In the video, Fucheck, can be seen and heard making various racist remarks towards Wynn, a black male. As Fucheck drove away, he reportedly yelled the word “n….r”. at the victim and “this is why you people get shot”.

“There is no place in our diverse County for hate and the violence that too often spawns from it,” stated Miami- Dade Police Department Director Alfredo Ramirez. “I’m thankful for the excellent and timely investigation from our Northside District Detectives on this case which is just another example of the important work done each and every day by our community’s police.”

“This case is another example of the law enforcement partnerships we have in South Florida. Miami Dade Police Department immediately began investigating the case to ensure the safety of our community and the State Attorney’s Office worked diligently to ensure justice was served,” said Florida Department of Law Enforcement Miami Special Agent in Charge Troy Walker.

Prosecutors are alleging that but for the fact that Wynn is a black man, the entire incident would not have occurred. Fucheck’s arrest came as a result of the cooperation and proactive investigation by Miami Dade Police Department Northside District General Investigations Unit and the State Attorney’s Gun Violence and Hate Crimes Units.