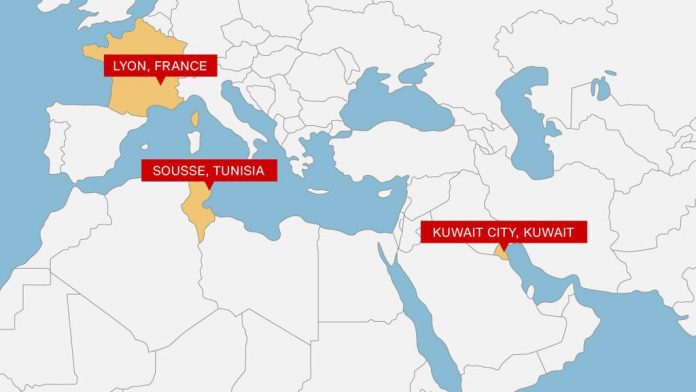 Terror attacks were reported in three countries today: At least 37 people were killed in an attack on a beachfront Tunisian hotel, Tunisian officials said, according to the state-run TAP news agency.

In France, a severed head was found in a terror attack at a U.S.-owned gas company, according to French President François Hollande.

And ISIS has claimed responsibility for an apparent bomb blast at a Shiite-affiliated mosque in Kuwait’s capital, leading to a number of reported death and injuries.

Hotel guests saw bloody bodies in the sand as well as seeing people from other hotels jumping over fences to get further away from the scene. Visitors in the area are taking precautions by putting mattresses up against the door to slow down terrorist who might try to enter forcefully.

At a gas factory near Lyon in southeastern France, one person was beheaded and two were injured according to French President Francois Hollande.

ISIS has claimed responsibility for a bomb that killed and injured a number of people at the Shiite-affiliated Al-Sadiq mosque in Kuwait’s capital during prayers on Friday.

Sajjan Gohel, the international security director for the Asia-Pacific Foundation think tank, said the three attacks were “an unprecedented day for terrorism.” He noted that it remains unclear who is responsible but the perpetrators fit in with those who are “buying into the … doctrine that groups like ISIS articulate.”

“Terrorism is something that, unfortunately, we’re going to have to accept as part of our daily lives,” said Gohel, who is also an Islamist ideology expert at the London School of Economics. “Terrorism is now diffuse: It’s not autonomous, it’s not necessarily being coordinated by one particular group, (and) it can often be very spontaneous.

“… Gone are the days of the al Qaeda large-scale plots where the cell was big, the authorities could disrupt it, arrest (people) and prosecute. Now are are seeing an increase in the volume of terrorism because the plots sometimes actually are on a smaller scale (which makes them) harder to protect, harder to monitor.”