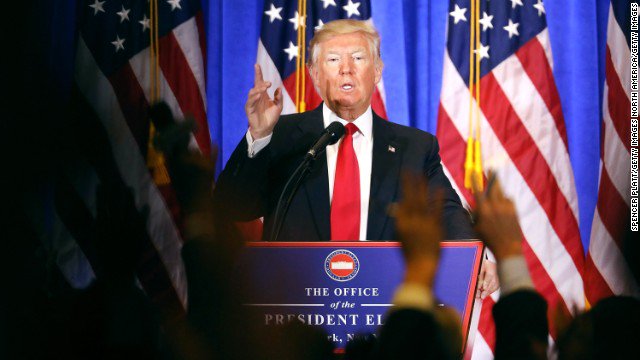 Turkish President Recep Tayyip Erdogan is no friend of the media. Since an attempted coup against him in July, he has jailed at least 144 journalists and shuttered or seized control of more than 150 media companies, according to Human Rights Watch. Now he is praising U.S. President-elect Donald Trump for his aggressive tone toward American media.

Erdogan commended Trump for putting a CNN reporter “in his place” during a news conference Wednesday. Trump had excoriated CNN’s Jim Acosta, refusing to call on him because “your organization is terrible” and telling the reporter, “I’m not going to give you a question. You are fake news.” Trump was angry that CNN had published a report on alleged Russian efforts to compromise him.

It’s the latest indication that Trump and Erdogan are feeling their way toward friendship. The pair have a rocky past: In June, Erdogan demanded that Trump’s name be removed from Istanbul’s Trump Towers because of his disparaging remarks about Islam, while Trump has appointed advisers who are actively hostile to Turkey. A video released during last summer’s attempted coup showed retired Army Lt. Gen. Michael Flynn, the national security adviser pick, cheering on the generals who tried to seize control of Erdogan’s government. (Flynn has since made nice, penning an Erdogan-friendly op-ed in the Hill.) Trump’s nominee to run the CIA, Rep. Mike Pompeo, R-Kan., piled on during the coup attempt, comparing Turkey to Iran and calling it an “Islamist dictatorship.”

Now things are looking up. After the election, Erdogan called protests against Trump’s victory “a disrespect to democracy.” And during a call just days later, Trump reportedly told Erdogan that his daughter Ivanka admired him. For his part, the president-elect praised Erdogan after the coup attempt – “I do give great credit to him for turning it around,” he told reporters – and said that the United States shouldn’t criticize Turkey for its crackdown.

It’s possible that Erdogan is just trying to get into Trump’s good graces to secure what he really wants: the U.S. government’s agreement to extradite Pennsylvania-based cleric Fethullah Gulen. Gulen is a wealthy Turkish preacher with millions of followers. While he was once an ally of Erdogan’s, Gulen is now the Turkish president’s favorite boogeyman. Erdogan accused him of orchestrating the coup attempt, and the Turkish government has used flimsy charges of being a “Gulenist” to purge tens of thousands of people from government jobs, classrooms, the courts and other professions.

Erdogan wants Gulen returned to Turkey to face charges, but U.S. officials have so far refused to arrest the cleric. And even if Erdogan and Trump become close allies, the extradition decision will still be up to U.S. courts.