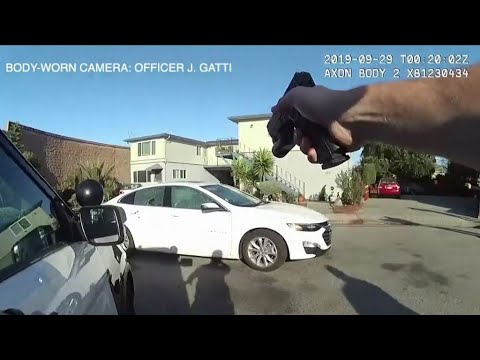 CALIFORNIA — (Scroll Down For Video) — San Mateo Police Department released more information regarding an officer involved shooting that occurred on Saturday, September 28, 2019, at 5:19 P.M. SMPD officers were involved in a shooting in a cul de sac at the end of East Hillsdale Court following a short pursuit. San Mateo Police detectives investigating the criminal activity of the suspects leading up to the critical incident determined both suspects flew to Los Angeles from Philadelphia on the afternoon of September 26, 2019. They then drove to Northern California in a rented white Chevrolet Malibu after stealing a license plate registered to a Honda in Anaheim. Over the course of 48 hours after landing in Los Angeles, leading up to the officer involved incident, the suspects committed a series of theft related crimes in at least 11 locations in Southern California and the Bay Area, of which at least 9 were shopping malls and/or retail stores. Information obtained during the investigation indicates the suspects were shoplifting in Daly City on September 27 before spending the night in Walnut Creek. The suspects then stole a paper temporary license plate from a vehicle in Walnut Creek and on September 28 aresuspected of committing multiple thefts in San Jose and Palo Alto before arriving at Hillsdale Shopping Center in San Mateo that afternoon.

The suspects were also seen on camera committing numerous thefts there, including the theft of a woman’s wallet and subsequent use of her credit card to purchase gift cards at Macy’s. While the suspects were inside the Hillsdale Shopping Center, an SMPD officer observed the suspects’ rented Chevrolet Malibu illegally parked in a handicapped stall without a placard. The SMPD officer identified the vehicle as suspicious due to it being parked unoccupied with the engine running, having a covered VIN, and a license plate belonging to a Honda out of Anaheim. The officer requested additional officers to help with the investigation just before the suspects returned to their vehicle. The Chevrolet exited Hillsdale Shopping Center as it was being monitored and officers attempted to stop the vehicle. The suspects failed to stop and led officers on a pursuit, during which the occupants threw credit cards out of the vehicle along S El Camino Real at 31stAvenue. During the pursuit, the suspect vehicle hit a parked car on the 400 block of E Hillsdale Boulevard and continued to flee toward E Hillsdale Court. At 5:19 P.M., the suspect vehicle entered a cul de sac as officers closely followed.

Seconds later, the suspect vehicle drove toward an oncoming police vehicle and then reversed toward an officer on foot. The officer on foot discharged his service weapon striking the two occupants in the vehicle. Officers immediately called for paramedics and began rendering medical aid until San Mateo Consolidated Fire Department personnel arrived to take over medical care. The suspects were transported to the hospital and treated for their injuries. The San Mateo County District Attorney’s Office continues to investigate the officer involved shooting and is the point of contact for media inquiries about the shooting. Following protocol in all officer critical incidents, the involved officer was placed on administrative leave and remains on leave while the District Attorney’s Office conducts its investigation. San Mateo Police Department is also conducting an administrative review of the shooting as it relates to department policy and procedure. This investigation is also ongoing.

The San Mateo Police Department arrested these individuals on the following charges. The San Mateo County District Attorney’s Office has deferred consideration of the charges until their office has completed the officer involved critical incident investigation.

Both the District Attorney’s Office and the San Mateo Police Department continue their independent investigations, and San Mateo Police detectives continue to develop additional charges based on the suspects’ activities leading up to the officer involved shooting.