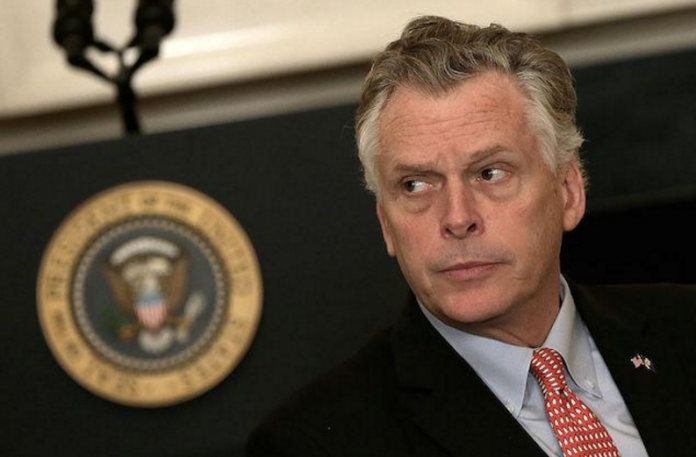 PHILADELPHIA – Virginia Gov. Terry McAuliffe (D) stood before Democrats gathered at their party’s national convention Monday and promised to individually restore voting rights to hundreds of thousands of felons within the next two weeks.

McAuliffe vowed to use an autopen to sign the orders, sidestepping a recent court ruling that invalidated the step he took in April to restore the rights of about 200,000 felons en masse.

The Virginia Supreme Court on Friday decided that McAuliffe had overstepped his legal authority and could restore rights only on a case-by-case basis. The court ordered that 13,000 felons who had registered to vote between April and last week must be removed from the rolls.

The ruling appeared to reverse a signature achievement of McAuliffe’s administration. But he indicated that it inspired him to take action.

“By the end of this week, I will have restored the rights of all 13,000!” a defiant McAuliffe thundered at breakfast for the state party delegation at the Democratic National Convention. He got a standing ovation.

“And in two weeks all 206,000 will have their rights back, folks!” he said. Another standing ovation.

In fact, even more people will register to vote “because they will not let this injustice stand by,” he said.

The ruling spurred another change. McAuliffe’s administration had repeatedly declined to release the names of newly eligible voters. But, suddenly, all bets were off. He vowed to make the list public in the hope of encouraging more of the eligible felons to register to vote.

To Republican lawmakers who had legally challenged the governor’s order, he said: “If that’s the game you want to play: Game on!”

Two hundred and fifty miles away in Richmond, more somber state employees were grappling with just how to make that happen.

“We’re working on the overall approach to this. How do we comply with the legality of the order? How do we do that in the most efficient way?” said Kelly Thomasson, secretary of the commonwealth who is in charge of rights restoration.

State Republican leaders, who had launched the legal challenge to McAuliffe’s April 22 clemency, were buoyant after prevailing in court last week. But they were angered by the governor’s promise to sign more than 200,000 individual restoration orders.

“It’s deeply disrespectful to the Supreme Court and a clear effort to circumvent the limits put on him by the constitution,” said Matt Moran, spokesman for House Speaker William J. Howell, R-Stafford.

With help from GOP commonwealth’s attorneys, Republicans said they will scrutinize every individual rights restoration order as they in the blanket order, when they discovered multiple errors. They found the McAuliffe administration had mistakenly restored rights of 132 sex offenders as well as convicted murderers on probation in other states. In both cases, Republicans said the felons did not qualify for restored rights.

“We have discovered scores of errors in the initial database,” Moran said. “If the governor is not careful, he will restore the rights to someone who is not deserving. And he will be held accountable for every single order he cares. He will not be able to cover his mistakes with clerical errors.”

As of Monday, no individual orders had been issued.

Thomasson, the secretary of the commonwealth, said her office will check public safety databases to review the criminal histories of the 13,000 felons who registered to vote.

Then they will probably produce 13,000 computer-generated rights restoration orders printed with the signatures of herself and McAuliffe, she said. Those orders will be mailed to newly enfranchised felons to the most recent addresses on file for them.

But McAuliffe’s blanket clemency order took the process further than any other governor had attempted.

McAuliffe rallied the Democratic base for his friend and presumptive presidential nominee Hillary Clinton on the first day of the national convention.

Whether it was gun control, abortion rights, Medicaid expansion – or rights restoration for felons – McAuliffe trumpeted a relentlessly positive message.

Later that day, Clinton tweeted her approval: “This is what dauntless leadership looks like. Thank you, @GovernorVA – proud to call you a friend.”