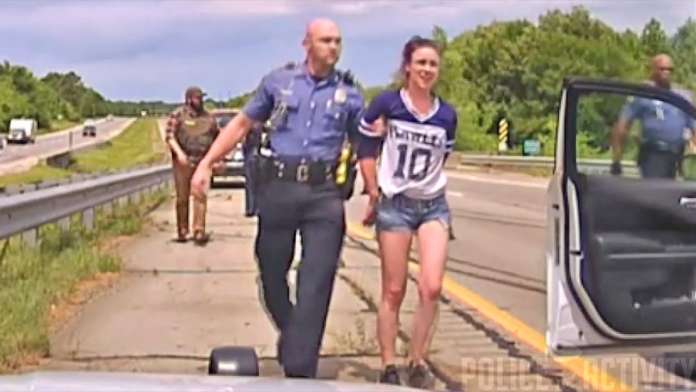 Sebastian County, Arkansas — Newly released dash cam and body camera footage from Sebastian County Sheriff’s Office shows a Fort Smith woman being arrested after she hit multiple law enforcement vehicles and flashed a gun at a Sebastian County deputy during a pursuit. The driver, Jennifer K. Porter, 27, was arrested on suspicion of eight counts of felony aggravated assault, fleeing and felon in possession of a firearm. A vehicle and pistol were reported stolen Tuesday, May 5, around 10:30 a.m. in the 17000 block of Highway 45 near Hackett around 10:30, according to a press release. The car was spotted at 11:15 a.m. on Highway 71 South near Greenwood speeding around 100 mph.

During this time, Porter rammed at least four law enforcement vehicles including one she disabled during a pursuit in a stolen pickup truck and also attempted to ram an innocent vehicle which just happened to be on the road. The pursuit continued on multiple county roads and state highways. Arkansas State Police were able to catch to the vehicle on Highway 71 South just north of the Jenny Lind community. Altogether, one Sebastian County Sheriff’s Office patrol unit was disabled and three ASP units also suffered damage because of the chase. No one was hurt during the chase or PIT maneuvers.