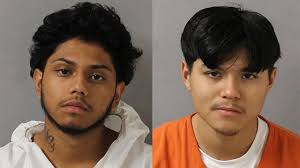 The investigation to this point shows that Josue Mojica, 18, and Ronaldo Conde, 16, went to the parking lot as part of a plan to rob Jauregui of marijuana and a gun. It is believed that when one of their associates got into Jauregui’s car, gunfire erupted. Persons in the area heard the gunfire and called 911. Jauregui was rushed to Skyline Medical Center where he was pronounced dead.

Mojica and Conde fled the scene with a 20-year-old woman who was also in the car with Jauregui. She received non-life threatening wounds during the gunfire and went to a local hospital where she is in stable condition.

Detectives have also identified another person, Juan Posada, 18, who is believed to have knowledge of today’s events and is being sought for questioning.