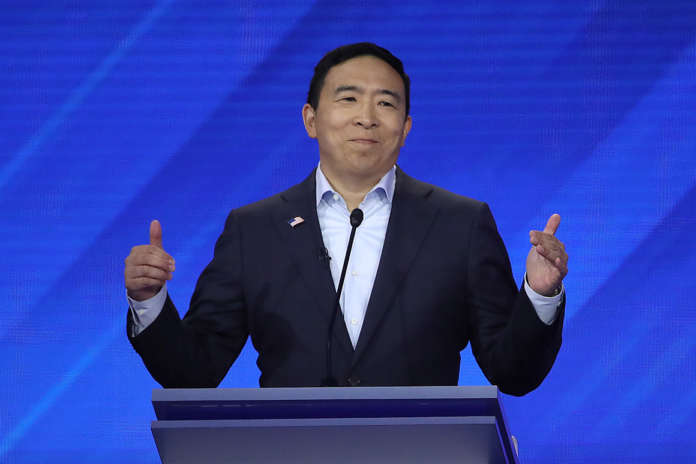 Entrepreneur Andrew Yang ended his unlikely bid for the Democratic nomination for president on Tuesday evening as results poured in from the New Hampshire primary that showed him once again trailing in sixth place behind the front-runners.

“While there is great work left to be done, you know I am the math guy, and it is clear tonight from the numbers that we are not going to win this race,” he told supporters in a concession speech from Manchester.

Yang had indicated in interviews that he would need to outperform expectations during the first primary of the contest to able to remain in the race after failing to pick up any delegates in the Iowa caucuses last week, a state where he spent much of his warchest.

The Manhattan businessman started his race near the end of 2017 as a virtual political unknown. Yang has never run or held office before but focused on his unique platform vow to create a “universal basic income” of $1,000 for every U.S. citizen over the age of 18.

With the help of his supporters, known as the so-called “Yang Gang”, Yang outlasted over a dozen career politicians including governors, senators and congressmen. He was able to qualify for every Democratic debate in 2019 and one of two in 2020, the last candidate of colour to appear on the debate stage.

Yang was not the only presidential hopeful to halt his campaign on Tuesday evening. Colorado Senator Michael Bennet, who was running in 10th place amid early New Hampshire results, brought an end to his campaign after also pinning hopes on the state’s primary contest.

‘Made me a better person’

“Though thousands of voters came out for our campaign tonight, tonight is not the outcome we fought so hard to achieve,” Yang told supporters, adding that his bid for the White House made him “a better person”.

“This is not an easy decision or something I made lightly with the team. Endings are hard, and I’ve always had the intention to stay in this race until the very end, but I have been persuaded that the message of this campaign will not be strengthened by my staying in this race any longer.”

Beyond the income plan, Yang championed national legalization of marijuana and unique policy takes on automation that attracted a wide spectrum of liberal Democrats, libertarians and even some Republicans disaffected by their party.

While Yang leaves the race, pundits expect him to have a continued role in the Democratic nomination and party insiders have told U.S. media that he could have a future position in a Democrat administration or politics in general.

Vermont Senator Bernie Sanders thanked Yang for “running an issue-focused campaign” and said he “looked forward together to defeat the bigotry of Donald Trump.”