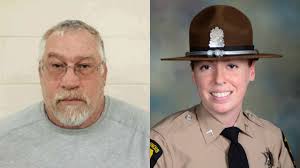 Pecatonica, IL – Illinois State Police (ISP) officials have arrested of Craig W. Dittmar, 55, for his involvement in the March 28th, 2019, fatal crash which resulted in the death of Trooper Brooke Jones-Story.

On April 11th, 2019, the Stephenson County State’s Attorney’s Office approved charging Dittmar with two counts of Reckless Homicide (both Class 2 Felonies), and one count of Operating A Commercial Motor Vehicle While Fatigued – Causing Death (Class 3 Felony). An arrest warrant was issued for Dittmar and the bond for the warrant was set by the judge at $250,000 (10% applies). Dittmar was later taken into custody and lodged in the Stephenson County Jail where he is being held in lieu of that bond.