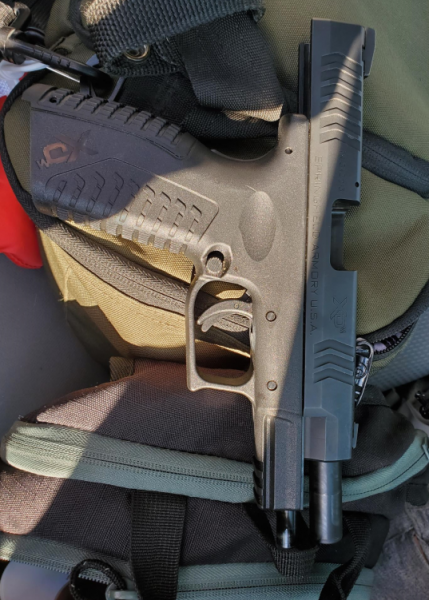 On Sept. 20, Falfurrias Border Patrol Station agents were following a group of suspected migrants near Falfurrias when they spotted two subjects with numerous water jugs. One of the subjects donning camouflage clothes and snake guards, had a large fixed blade knife on his fanny pack belt. Agents identified themselves and ordered the two subjects to the ground. The subject removed the fanny pack and placed it on the ground as he complied with the agents’ orders. They were arrested without incident. The fanny pack contained a loaded handgun. Agents requested additional backup and were able to apprehend a total of 13 migrants in the area. Record checks on the armed migrant from Mexico revealed an extensive criminal and immigration history to include possession of cocaine with intent to distribute, unlawful carrying of a weapon, assault causes bodily injury of a family member, and aggravated assault with a deadly weapon. All of the subject’s previous arrests were in the Rio Grande Valley.

On the same day, Kingsville Border Patrol Station agents apprehended a migrant from El Salvador near Sarita. Record checks revealed he is a Mara-Salvatrucha gang member with multiple previous convictions for assault, possession of marijuana. In addition, the subject has multiple removals from the United States.

On Sept. 21, McAllen Border Patrol Station agents apprehended a group of 17 migrants near Hidalgo. Record checks on a Salvadoran national, revealed he was convicted in Los Angeles for rape of spouse by force/fear/etc. and sentenced to three years’ incarceration. He was then sentenced to 15 months confinement for immigration related offenses and subsequently removed from the United States.