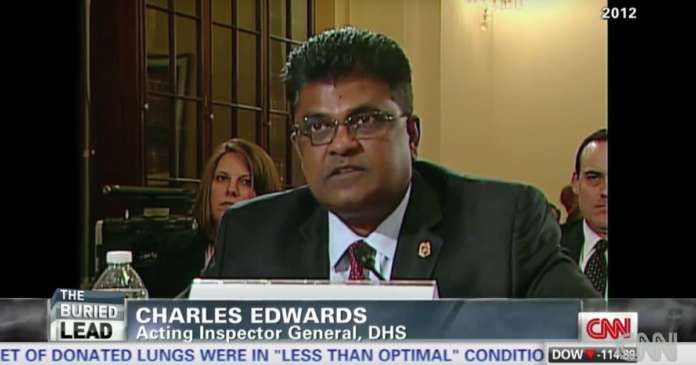 WASHINGTON, D.C. – A federal grand jury in the District of Columbia returned a sixteen-count indictment against a former Acting Inspector General for the U.S. Department of Homeland Security (“DHS”) and a former subordinate for their alleged theft of proprietary software and confidential databases from the United States government as part of a scheme to defraud the United States government.

The indictment charges Charles K. Edwards, 59, of Sandy Spring, Maryland, and Murali Yamazula Venkata, 54, of Aldie, Virginia, with conspiracy to commit theft of government property and to defraud the United States, theft of government property, wire fraud, and aggravated identity theft. The indictment also charges Venkata with destruction of records. The indictment, which was returned on Thursday, March 5, 2020, was unsealed this morning after Edwards and Venkata were taken into custody under the charges. Both defendants will be presented for an initial appearance at 1:45 p.m. today before United States Magistrate Judge Robin M. Meriweather.

According to the allegations in the indictment, from October 2014 to April 2017, Edwards, Venkata, and others executed a scheme to defraud the United States government by stealing confidential and proprietary software from the Office of the Inspector General of DHS (DHS-OIG), along with sensitive government databases containing personal identifying information (“PII”), so that Edwards’s company, Delta Business Solutions, could later sell an enhanced version of DHS-OIG’s software to the Office of Inspector General for the U.S. Department of Agriculture (“USDA-OIG”) at a profit. Although Edwards had left DHS-OIG in December 2013, he continued to leverage his relationship with Venkata and other DHS-OIG employees to steal the software and the sensitive government databases.

The indictment further alleges that, in addition to stealing DHS-OIG’s software and the sensitive government databases, Venkata and others also assisted Edwards by reconfiguring his laptop so that he could properly upload the stolen software and databases, provided troubleshooting support whenever Edwards required it, and helped him build a testing server at his residence with the stolen software and databases, which contained PII. As further part of the alleged scheme, Edwards retained software developers in India for the purpose of developing his commercial alternative of DHS-OIG’s software. In so doing, Edwards not only shared DHS-OIG’s proprietary software with foreign nationals but also the PII of U.S. federal employees and individuals implicated (either as victims, subjects, or witnesses) in official investigations conducted by DHS-OIG as well as the Office of Inspector General for the U.S. Postal Service (“USPS-OIG”).

The indictment is the result of an ongoing investigation by DHS-OIG and USPS-OIG and is being prosecuted by Assistant United States Attorney David B. Kent of the U.S. Attorney’s Office for the District of Columbia and Trial Attorney Victor R. Salgado of the Criminal Division’s Public Integrity Section.